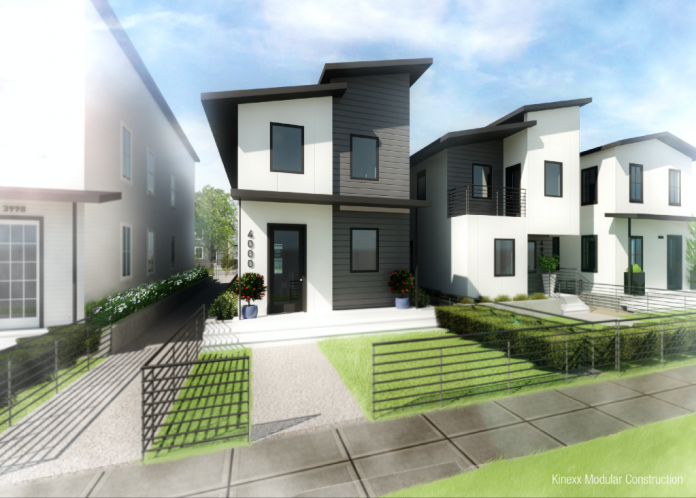 Chicago Cityscape reports on a new construction permit and the building process for a “modular” and “prefabricated” single family home in Back of the Yards.

The March permit is from  Kinexx Modular Construction, founded by Josh Braun and Architect Paul Tebben.

The 1,450 sq. ft., three-bedroom and two-story “starter home”  has a target sale price in the low 200s, excluding the cost of the land. The Resurrection Project, an affordable housing manager and developer based in Pilsen, owns the land, Chicago Cityscape reported.

The house is raised two feet above grade, and there is an inaccessible crawl space below the house for two reasons: Keep some mechanicals above ground for easier access, and to create a small front stoop, “to engage with the legacy of stoops in the neighborhood”.

Braun said “we’re trying to make a product that most working people can attain. Everyone wants something to call their own. I don’t think that has ever changed, although the way to attain it has.”

The building inspection process is different for prefabricated homes, Braun said, noting that the Chicago Department of Buildings has been cooperative throughout the process.

“Our general understanding is that the building inspectors will do a rough inspection in the factory at the time the structure is reaching 80 percent finish, transported to the lot, inspected again, completed, and then inspected after completion”, Cityscape quoted the builders as saying.

The goals are for more than high-quality and lower-cost house design. The company aims for easing development throughout the entire process. “We are soup to nuts”, Braun said, “providing the design, obtaining the permit, hooking up utilities, building the foundation, and the landscaping.” In three years they want to have a turnkey solution in place to allow an owner of vacant lots to be able to pay a deposit and get the house keys 75 days later.

Four to six construction workers are needed each day, and “fortunately, during these early stages, the effects of the pandemic have been limited to the implementation of extra safety precautions,” Tebben said.

Perkins + Will to move to Wrigley Building