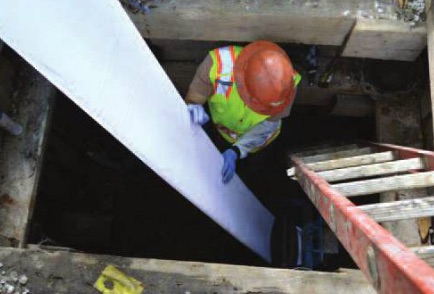 Orland Park Mayor Dan McLaughlin visited the project in the summer, joined by several delegates interested in how the municipality is investing in new technology to help bridge the state’s infrastructure gap. This included Dianna Chen of the Illinois Department of Commerce & Economic Opportunity (DCEO) as well as representatives from local and international engineering firms and neighboring municipalities. (McLaughlin is also executive director of the Chicago Builders Association.)

The project covers more than 11,000 ft. of watermain including more than 200 individual service connections which connect each property to the main. By virtue of a “duplicate” watermain installed above ground before the robots are released underground, the residents are not without water for a single day.

Burke Engineering designed the project with Airy’s, Inc. hired as general contractor. FER-PAL Infrastructure was subcontracted to complete the lining of the watermain with its robots and CIPP. The trenchless technology specialist has its U.S. headquarters in in Elgin, and has rehabilitated miles of watermains in more than 20 municipalities across Illinois.

By utilizing this technology, the municipality is saving money as CIPP reduces project costs by 30 percent on average. In addition to this, by using this trenchless technology, the village is reducing the construction impact to its residents as the trees, streets and sidewalks above the main are left unaffected.

“With a street lined with such beautiful trees we need to do everything we can to keep the streetscape intact,” Mayor McLaughlin said while visiting the site. “Technologies like FER-PAL’s will go a long way to keep these trees in place while we rehabilitate our infrastructure.”

CIPP consists of a polyester liner injected with an epoxy resin on site and pulled into the main. It is then cured with hot water which hardens the liner and bonds it to the host main.

Once cured, FER-PAL uses its patented robotic technology to drill out each service connection along the main. This avoids the need to dig and replace every service that connects houses and business to the watermain.

Lastly, hydrants and valves are replaced and the main is connected back together. The lined sections are then recommissioned and the site is fully restored.

The project is slated for completion in early fall, with other municipalities looking to release similar projects for 2015-2016.
Orland Park, 25 miles southwest of the Chicago Loop, has a population of 60,000. The village has been recently ranked in the top 100 places to live in the United States and has been named the commercial center of the Chicago Southland Suburban Region.