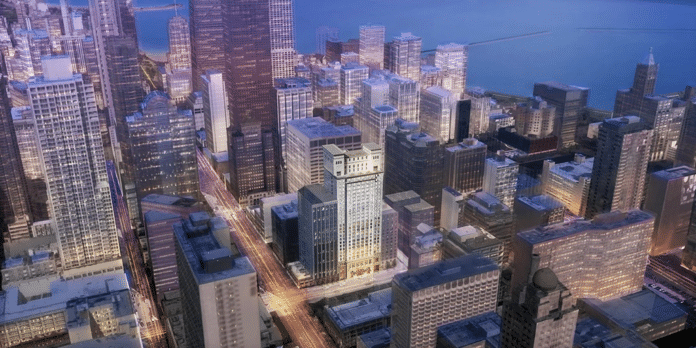 RIU Hotels & Resorts says it “has snapped up a well-located plot in the heart of the Windy City” with a view to creating a four-star property with a sky bar on the 26th floor.

The land at 150 East Ontario St. in the Streeterville neighbourhood will be the site of the.  four-star Hotel Riu Plaza Chicago within a new build skyscraper rising up to 28 storeys and comprising more than 350 guestrooms in total, the hotel organization says in a statement reported in TopHotelNews.

Developer The Prime Group received Chicago Plan Commission approval last summer for the project designed by Lucien LaGrange Studio, Chicago YIMBY reported earlier. Construction is expected to begin in the spring and take approximately two years to complete. The building will be designed according to the Chicago School architectural style developed in the city in the late 19th and early 20th centuries, the statement says.

“We have been working to make this opportunity a reality for several years,”  said Luis Riu, CEO of RIU Hotels & Resorts: It’s a dream location for any investor, right in the heart of the city.

“That’s why I’m so delighted to present this project, which has gone ahead despite numerous difficulties. Chicago is a great tourist destination that complements and enhances our range of urban hotels and strengthens RIU’s commitment to the United States, where we are about to open our fourth hotel, the Riu Plaza Manhattan Times Square.”

Developers propose hotel, apartments above Chicago’s Union Station, but not everyone...