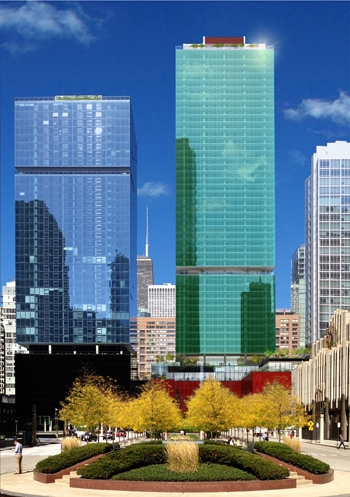 The second, 54-story Optima tower has received a $81,973,000 building permit from Chicago  for a “full building review for a proposed 54 story, 381 unit building” at 220 E. Illinois in Streeterville.  This permit follows one issued in August for $26,481,000 for “infrastructure only” and an earlier one in May for the “foundation only” for what was then listed as a 55-story building.

The permit filing says the owner, Optima, Inc. is acting as its own general contractor. Optima founder David Hovey is the architect.

Published reports say Optima purchased the land in April 2013 for $29 million. The earlier reports indicated that the project would be 60 storeys with 400 apartments and 200 hotel rooms. “We have an exceptional site,” Hovey told Crain’s in 2013. “And it’s really better than other sites that are under construction or completed right now.”

There is another Optima tower next door. The architect/owner “envisions an “interlocking composition”  the two   towers, an additional nine-story structure (probably a podium), and a plaza,” Curbed Chicago reported in 2013.

Crains reported in 2014 that Hovey said he and his partner, Tampa, FL.-based DeBartolo Development, had closed on a $160 million construction loan” for the project, to be named Optima Chicago Center II, which will be completed in 2018.

The development venture borrowed the money for the $225 million project from Bank of America, PNC Bank and Fifth Third Bank, Hovey was quoted as saying.

University of Illinois at Chicago cuts ribbon on new building