North Branch Works has unveiled recommendations for the 32-acre manufacturing district that once housed industrial businesses including A. Finkl & Sons, A. Lakin & Sons, and Gutmann Leather tannery.

The community development corporation hopes that the site along the Chicago River’s north branch will attract a wide range of private next-generation industrial uses as well as public amenities.

The study, funded by the U.S. Environmental Protection Administration (EPA) in partnership with the Delta Institute, envisioned three different scenarios where the site would continue as a jobs engine.

According to Curbed Chicago, the study calls for primary uses to feature a large corporate anchor or R&D facility, a multi-tenant tech office, maker space, industrial flex space and a brewery/distillery.

The proposal also suggests there will be restaurants and retailers selling products produced on site, along with public amenities including a plaza or open space, a public river trail,river access and parking either as surface lots or structures. 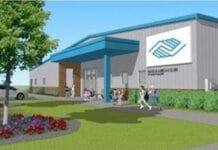