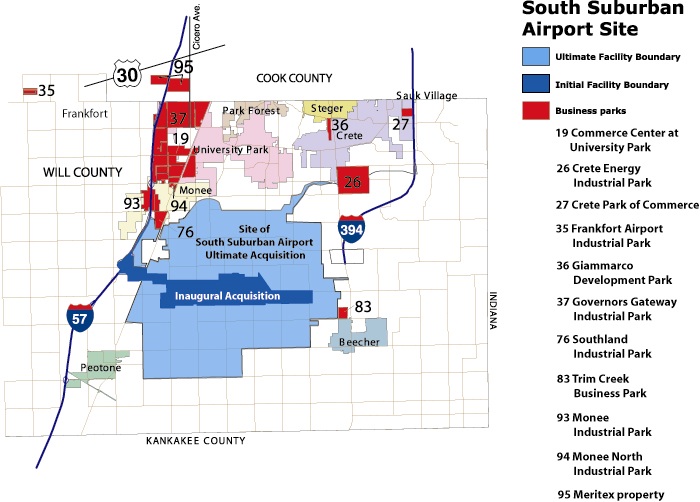 IDOT has organized a sales presentation for potential partners to help it design, construct and operate the South Suburban Airport planned near Peotone in Will County, reports Southtown Star. Officials, business representatives and residents totaling 150 gathered to attend the meeting at the Tinley Park Convention Center.

Addressing the gathering, IDOT’s acting director Erica Borggren said: “Illinois is absolutely serious about building this airport” and “as quickly as possible.” IDOT official have asked for development ideas and suggestions and held one-on-one sessions the day of the meeting. IDOT is planning to minimize financial risk and compensate partners with airport revenue.

IDOT needs to acquire 2,200 more acres of land using the available $50 million to build the 5,800-acre airport. The state body has already spent $86 million to acquire the rest. Awaiting federal approval, which is expected to come by 2016 or 2017, IDOT hopes to select partners by 2018 at the latest and projects 2020 airport availability for cargo.

According to IDOT’s director of aeronautics Susan Shea, the airport will feature six runways and will be built to have room for future development. The $702 million inaugural plan includes a 9,500-ft. runway, four passenger gates, an access road and an interchange at I-57 and Illinois 50.

IDOT expects 11,000 construction jobs and an additional 14,000 permanent jobs resulting from the project.

Several construction firms’ representatives have shown interest and some are looking for other construction and development projects this airport project will bring. Frank Patton of Crete-based Great Lakes Basin announced his firm’s plan to build a rail line from Milwaukee to Rockford to Kankakee County with a stop at the South Suburban Airport.

“If there’s more commerce in the area, more people will come to the area,” said Walter Reddell, airport manager at the Meadow Creek Airpark subdivision on Harlem Ave. in Monee.