Research commissioned by Home Builders Association of Greater Chicago (HBAGC) reveals that solving housing affordability needs in Chicago require broader collaboration and a focus on creating more housing opportunities across all neighborhoods, not less, the association says in a statement.

“We believe the right solution necessitates the inclusion of both public and private stakeholders, working in collaboration, so that our municipalities thrive and there is housing for everyone” said Pat Cardoni, president of the HBAGC City Chapter. “With the proper incentives, private housing developers can build new housing for all residents of Chicago from affordable to market rate, while also creating thousands of new construction jobs and generating millions in new property tax revenue.”

The data identified more than 3,000 units of housing that are on hold or cancelled in the 2017 ARO Pilot areas. This includes more than 300 affordable units with a construction value of more than $1 billion. Proposals for housing development virtually stopped in the Pilot areas after enactment of new, more restrictive Pilot requirements. The demand for housing, however, did not stop. This created competition for available units, thus pushing rents higher. As a result, naturally occurring affordable housing was getting priced out of reach for historical occupants.

“The research tells a story of unintended consequences of city policies which restrict development of new housing in areas of Chicago where housing demand is highest. Imagine what one billion dollars in union wages, building supplies and professional fees could mean for the economy of Chicago,” Cardoni said in a news release.

“This represents a loss of more than $635 million in property taxes over the next 30 years. Further imagine what that money could do for Chicago schools, parks, fire and police. We need to find broad-based, equitable solutions that are equal to the status and desirability of the great City of Chicago, where housing is available for everyone. Ten percent of something is far better than 20 percent of nothing.”

HBAGC also released a list of recommendations for new Chicago housing policies, focused on increasing the supply of housing for all Chicagoans. One recommendation calls for the creation of Chicago Housing Opportunity Zones.

“Chicago has a number of great housing programs available but they need better focus,” said Paul Colgan, HBAGC’s government affairs director. “We want to take the best of local, state and federal initiatives for encouraging private investment and focus that investment into areas of need.”

Further, the HBAGC recommendations called for a Neighborhood Development Initiative that would free up 1,000 city lots for development of traditional Chicago two and three flat buildings. This initiative could create 2,000 to 3,000 market rate and affordable two and three bedrooms units for families. It includes education to train neighborhood residents how to become owner occupants of the buildings.

“The strength of traditional Chicago neighborhoods was built around owner occupied two and three flat buildings,” said Colgan. “We need to encourage the rebuilding of these neighborhoods by filling vacant lots with new housing for families that not only helps creates naturally occurring affordable housing, but also helps build family and community wealth for hard-working Chicagoans.” 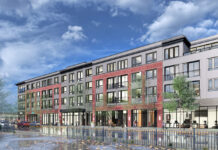