The GOP’s new plan includes conceptual renderings of a redeveloped site. One rendering, created by Adrian Smith + Gordon Gill Architecture, envisions a 1,700-ft. tower, which would become the city’s smallest building. The firm also offered a more modest plan, according to the Crain’s report.

Rauner had announced plans in 2015 to try to sell the building to a developer who would likely demolish the Thompson Center and replace it with one or more structures.

However, the Democrat-controlled legislature never voted on that effort.

Crain’s says the state’s Department of Central Management Services estimates the sale would generate net proceeds of $220 million and would prevent the state from addressing $326 million in deferred maintenance on the building. Additionally, the sale could generate $45 million in property taxes for Chicago, according to the governor’s office.

However, commercial real estate experts told Crain’s that the state would have a hard time getting even half of the estimated $220 million in a sale, citing extensive demolition and development costs.

A potential deal could also be complicated by the building’s location atop CTA train lines and the city’s pedway system. The state would also have to negotiate a buyout of the retail space in the building, which is currently controlled until at least 2034 by Boston-based Winthrop Realty Trust and Chicago-based Marc Realty.

However, even with these complications, the Thompson Center’s prime Loop location would attract strong interest from potential buyers who rarely see sites of that size become available downtown, Crain’s reports. 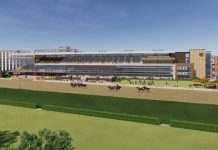