A hotel project with 222 rooms will break ground at the east end of Chicago’s Navy Pier by January 2018 in anticipation of a summer 2019 opening date.

The hotel’s construction schedule was announced Dec.11 by its developer First Hospitality Group, following approval of the project’s demolition permit issued by the city Oct. 26.

No changes have been made. Instead, the new drawings offer a more detailed street view of the project. They focus on the entrance of the hotel and its floor to ceiling windows.

Although some parts of the brick structure will be retained, the architects have changed most of the facade, transforming the hotel into a glassy seven-story structure with floor to ceiling windows that will provide guests with views of Lake Michigan.

The name of the hotel remains undisclosed, however, it is confirmed that it will be operated by Hilton Hotels & Resorts under its Curio Collection, with Swiss realty firm Acron Group acting as equity partner.

The building will still have five levels of guest rooms above the existing two levels that will be reactivated into new dining and entertainment amenities. Designers have also retained the rooftop bar and restaurant, which will be constructed above the Shelter Building that serves as a bridge between the Grand Ballroom and Festival Hall. 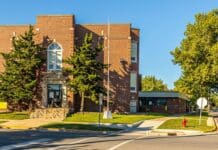 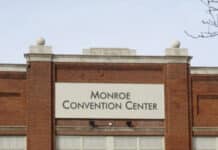