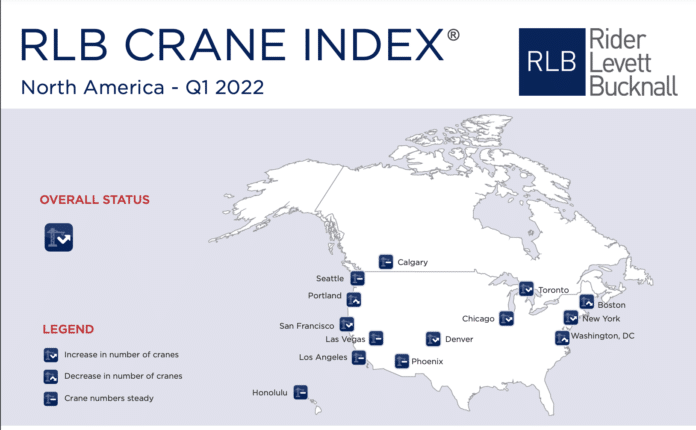 “High-rise work in Chicago has picked up significantly, with the city gaining 3 cranes since the previous survey (for a total of 10), the RLB consultancy said in the report. “Residential remains the strongest sector with luxury rental leading over condos; construction on the largest residential building previously halted due to Covid has now resumed, having switched from condo to rentals,” RLB said in an April 4 statement.

“In the North End, a medical research lab – the first building of a massive mixed-use development – has broken ground.”

While the surge of the COVID-19 Omicron variant is subsiding, pandemic-induced problems remain. Supply chain issues continue to plague all levels of the construction industry, from raw materials to finished products, as pent-up demand for building supplies grows. A spike in fuel prices and a shortage of truck drivers are still slowing overland transit of goods, a condition exacerbated by lack of warehouse space, RLB reports.

Significant recent events — the Russia-Ukraine war and inflation — are now compounding the current picture. The conflict in eastern Europe is likely to affect costs and availability of some key materials; Russia is a major producer of copper and aluminum. Inflation is on the rise, pushing prices across the board higher.

“It’s a complicated situation,” said Julian Anderson, president of RLB North America. “While the bipartisan passage of the $110 billion Infrastructure Investment and Jobs Act is a major step forward, it remains to be seen how inflation will affect its implementation.”

RLB outlines these observations about the 14 communities covered in the report.

Editor’s note: Chicago crane numbers have been corrected since the original post.  We regret the original error. 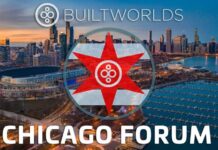 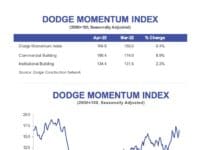