The newly rehabbed, 1,063-sq. ft, three-bedroom house, is in the Washington Heights neighborhood on Chicago’s South Side.

Johnson, a mother of three and administrator at Harold Washington College, currently rents an apartment. She will be responsible for paying only property taxes, insurance and utility bills. She said she’s looking forward to hosting many family gatherings in her own house.

“I never had a holiday or birthday dinner at my home,” she said. “I want this house to be a home where all are welcome. It will mean the world to me to have my family comfortably in my home.”

The CCLBA says in a statement that the giveaway raises awareness of its Homebuyer Direct Program, which enables people to purchase vacant, abandoned homes at below-market rates, rehab them and earn immediate equity.

Since its inception in 2017, the Homebuyer Direct program has provided more than 140 homes to homebuyers and earned them an average of $20,000 in instant equity. The program focuses on boosting homeownership in areas where lingering effects of the 2008 mortgage crisis left a glut of vacant and abandoned properties in Cook County and slowed community development.

“Homeownership builds neighborhoods, and it’s a family’s ultimate peace of mind,” said Cook County Commissioner Bridget Gainer, chairperson of the Land Bank. “The Land Bank makes that dream more affordable for thousands of people across Cook County. Today, the public and private sectors are coming together to help a homeownership dream become a reality.”

“Seeing the excitement on Ms. Johnson’s face is priceless, and we’re honored to play a role in helping one of her dreams come true,” said Nicole Johnson‐Scales, senior vice-president, community and economic development, at Fifth Third Bank, which sponsored the award. “Home ownership is an important step towards generational wealth.”

The CCLBA is a nonprofit organization founded by the Cook County Board of Commissioners in 2013 to address residents and communities hit hard by the mortgage crisis. CCLBA gives local developers, community groups and potential homeowners the tools to transform their own communities from within.

CCLBA acquires properties that have sat tax‐delinquent, abandoned and vacant for years and sells them at below‐market rates to qualified community‐based developers, who then rehab the homes. This approach not only keeps revenue and jobs in the community, but it also helps local developers grow their businesses. 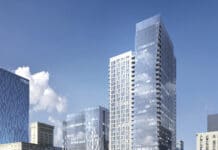 Most Illinois construction to remain essential during COVID-19 pandemic despite New...

Developers get $82 million in financing to redevelop old hospital in...