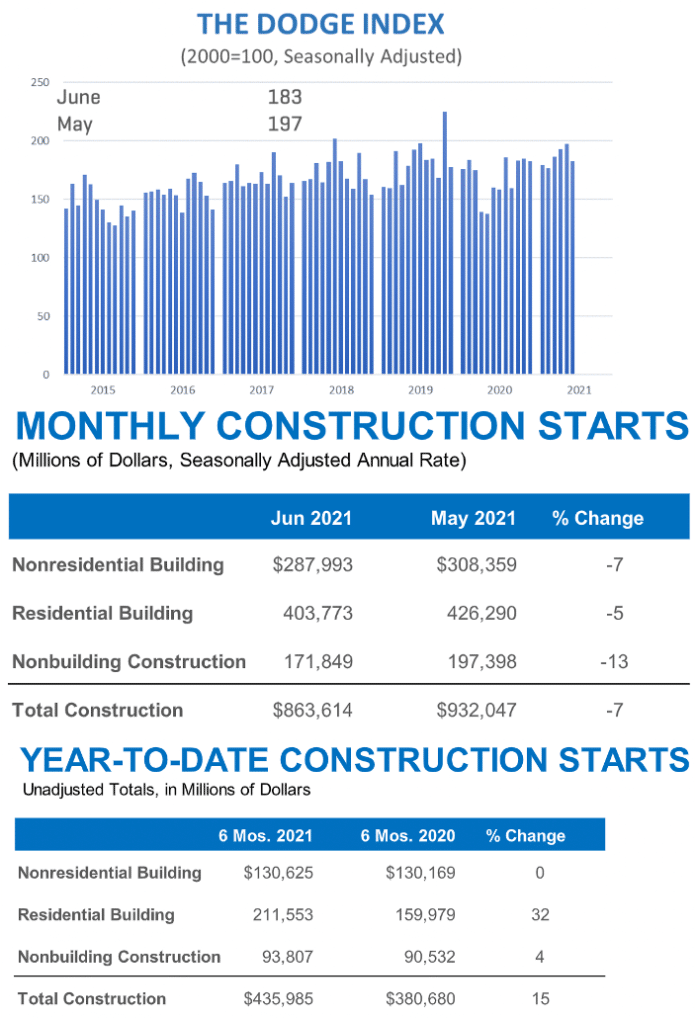 Across the nation, total construction starts lost 7% in June, slipping to a seasonally adjusted annual rate of $863.6 billion, Dodge Data & Analytics says in its monthly report. All three major sectors (residential, nonresidential building, and nonbuilding) pulled back during the month. Single family housing starts are feeling the detrimental effects of rising materials prices. Large projects that broke ground in May were absent in June for nonresidential building and nonbuilding starts, resulting in declines.

“Unabated materials price inflation has driven a significant deceleration in single family construction,” Richard Branch, Chief Economist for Dodge Data & Analytics, said in a July 20 statement. “Lumber futures have eased in recent weeks, but builders are unlikely to see much relief over the short-term, meaning building costs will continue to negatively influence the housing industry. On the other hand, the nascent recovery in nonresidential buildings has continued on as projects pile up in the planning stages. These mixed signals coming from both residential and nonresidential construction starts suggest that recovery from the pandemic will remain uneven in coming months as rising materials prices and labor shortages weigh on the industry.”

Below is the full breakdown:

Nonbuilding construction starts lost 13% in June, dipping to a seasonally adjusted annual rate of $171.8 billion. While highway and bridge starts slid 7%, the overall decline in nonbuilding starts was the result of a 63% drop in the utility and gas plant category that followed a large increase in May. Total nonbuilding starts, excluding the utility/gas plant category, rose 3% on gains in environmental public works and miscellaneous nonbuilding. Total nonbuilding starts were up 4% within the first six months of 2021. Environmental public works surged 35%, while utility/gas plants gained 13%. Miscellaneous nonbuilding (-6%) and highway and bridge starts (-9%), however, dragged on the sector.

The largest multifamily structures to break ground in June were the $267 million 1900 Crystal Ave residences in Arlington VA, and the $250 million Five Park Condominiums and Apartments in Miami Beach FL.

Regionally, June’s starts rose in the Northeast but fell in all other regions.