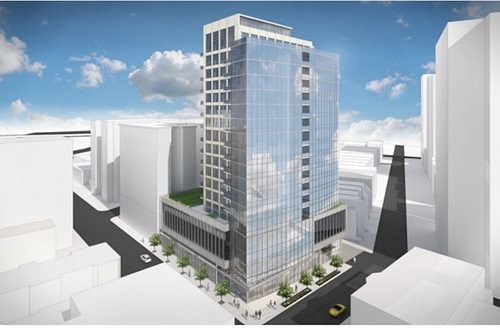 Chicago-based developer Lexington Homes LLC and architectural firm Pappageorge Haymes have formally submitted a plan to build a 17-story condo tower at the site of Market Place grocery store on 523 W. Diversey Parkway in Lincoln Park to Ald. Michele Smith (43rd) on Sept. 8. The proposal follows a previous proposal by by Lexington Homes a year and a half ago for a 22-story apartment tower at the same location, reports Chicago.curbed.com.

The 205-foot building at Diversey will have a primarily glass exterior and will include 78 condos. Currently the grocery store site and parking lot, which are separated by an alley, do not fall under the same zoning designation, but the developer needs the site to be considered a single zoned development, reports Dnainfo.com. Lexington Homes would like to build four single family homes which would reach 50 feet in height on the parking lot containing 81 parking spaces in Hampden Court. The parking space will be built above 7,700 sq. ft. of retail space and on the alderman’s insistence will also include green roof.

“They want to essentially take that lot and put it on top of the building,” said Smith at the first community meeting. “That’s what they are arguing to us.”

The development plan has to go through several additional stages that include further discussions with the community. Residents of the neighborhood have expressed concern about increased traffic the project will bring to the already congested intersection of Diversey, Clark and Broadway.

According to lead developer Ken Barnes of Lexington Homes, construction work is expected to be completed in a year and a half.