After surviving threats of demolition, a Ukrainian Village building from the 1920s will be transformed into a condominium project.

Local firm MCZ Development has been granted a $4.9 million construction permit on Jan. 18 allowing work to commence on the historic site located at 1938 W. Augusta Blvd.

The property’s existing five-story structure was previously occupied by Chicago’s only Ukrainian dairy, Pure Dairy Products. Its most recent tenant was a Leona’s restaurant which closed down in 2017.

Based on the design plans by SPACE Architects + Planners, its Augusta frontage will be preserved and then incorporated into a new five-story structure to deliver a total of 16 homes.

Two of such homes are duplexes featuring individual yard spaces. The remaining will be three-bedroom condo units each measuring approximately 1,500 sq.ft.

Plans also includes a rooftop deck, balconies, ground floor parking for 16 cars and 8 bicycles, and a 14-ft. courtyard in between the building and the adjacent street. Such communal space will be concealed by the original stone facade.

On Jan. 15, the East Village Association has voted 14-4 in favor of the project, giving its developer community approval.

However, it still needs to secure the green light from the city’s Landmark Commission before it can commence construction. 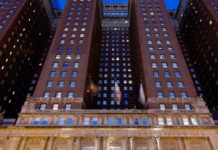