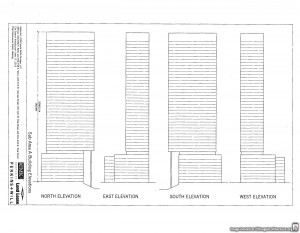 A joint venture between CMK and LendLease has submitted plans with the city to build 2,700 apartments in the South Loop. The proposal includes  five towers on 7.3 acres between Harrison St. and River City; the tallest structure would rise 47 stories and include 626 apartments.

The South Loop is one of Chicago’s hottest neighborhoods for residential development and the CMK/Lend Lease partnership has bought several tracts of land in the area, according to Crain’s. This specific parcel has been dubbed “River South” by developers.

Architect Ralph Johnson, a principal and design director at Perkins & Will, created the property’s master plan. It’s unclear whether the developers would build rental or for-sale housing there, or some combination of the two. CMK and Lend Lease executives did not respond to requests for comment.

The project is separate from  a 1.6-acre site at the corner of Harrison and Wells streets owned by Chicago-based D2 Realty. Chicago-based Phoenix Development Partners plans a large mixed-use complex on that parcel. Phoenix and D2 executives declined to discuss the project.