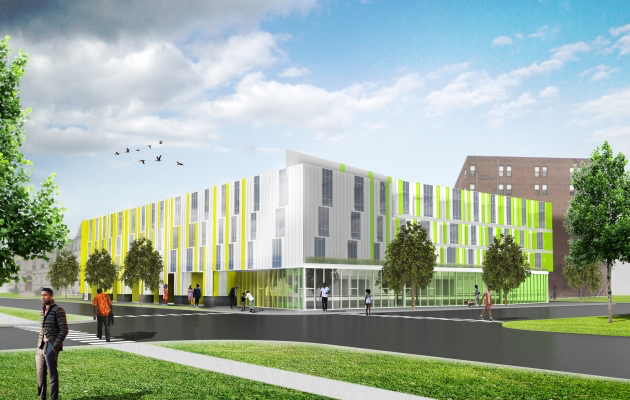 A 58-unit affordable apartment complex with artist workspaces would be developed in
Washington Park through financial measures introduced Sept. 6 to City Council by Mayor Rahm Emanuel, the city says in a news release.

A partnership between Brin Life Center LLC and KLEO Community Life Center would build the four-story, $23.5 million complex at southwest corner of Garfield Blvd. and Michigan Ave. Life Center Artist Residences would include 58 apartments for artists and families and 5,000 sq. ft. of retail and artist studio space on the ground floor. Forty-nine of the residential units would be rented to households at 60 percent of area median income with the remaining nine units offered at market rents. Amenities would include a fitness room, bike storage, community space, and on-site parking.

City assistance would include $6.4 million in Tax Increment Financing (TIF), $1.5 million in
Low Income Housing Tax Credits generating $15.2 million in equity, and $270,000 in donations tax credits that would generate $246,000 in equity.

Additionally, two city-owned, vacant parcels at 63 E. Garfield Blvd. and 5510 S. Michigan
Ave. would be sold for $1 each to support the project. Appraised at $925,000, the land would be combined with two other parcels owned by the project’s developer.