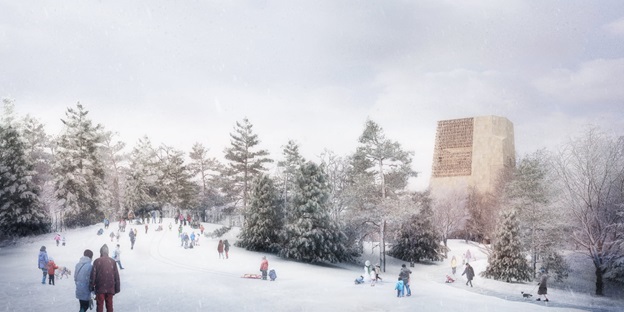 The Chicago Department of Transportation (CDOT) has designed a series of transportation improvements that will be co-ordinated with construction of the Obama Presidential Center (OPC) and are intended to make Jackson Park and the OPC into a world class destination on par with the City’s Museum Campus on the lakefront.

The plan will increase green space, improve connectivity and safety for pedestrians and bike riders, and accommodate future traffic demand.

The plan, approved by the City Council in 2018, will create more than five acres of new green space by converting the following roadway segments to parkland:

The following roadway improvements are designed to handle existing and future traffic demand and improve connectivity in and around Jackson Park and the surrounding neighborhoods:

Stony Island will benefit from a streetscape beautification that will include planted medians, left turn lanes at key intersections, and pedestrian refuge islands to enhance safety.

Reconfiguration of the intersection of Stony Island, Midway Plaisance and 59th and 60th streets to improve capacity and pedestrian and traffic safety.

Modernization or installation of seven traffic signals, providing the opportunity to interconnect and synchronize traffic as well as being compatible with potential Bus TSP technologies.

Installation of new energy efficient street lights along the new sections of roadway.

These roadway improvements, as well as others contemplated in the federal review, are funded through $174 million in funds programmed by the State of Illinois.

Chicago is among best cities for construction workers