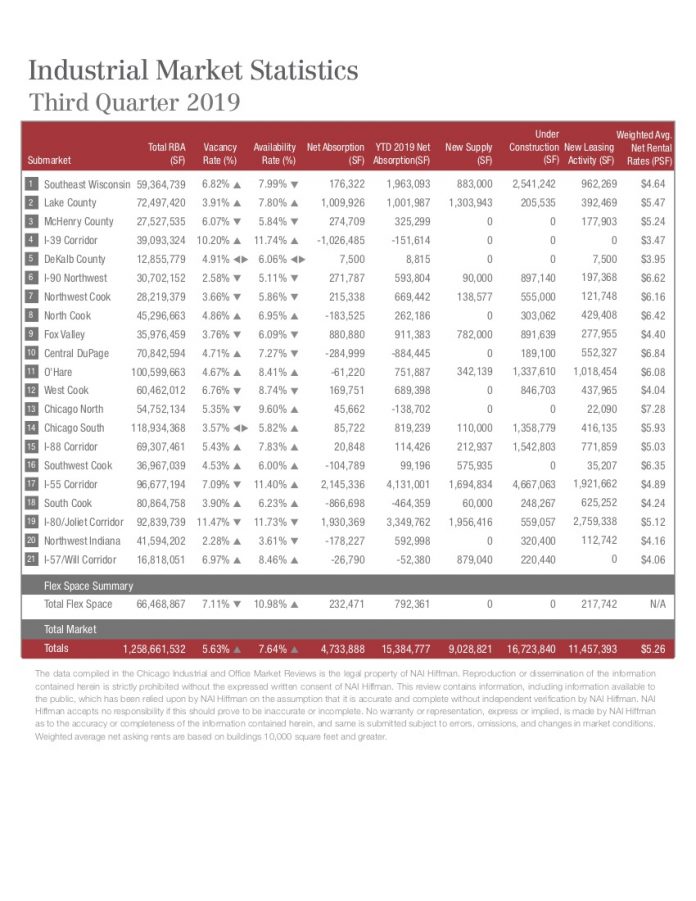 Buoyed by the continued growth of e-commerce, Chicago-area industrial developers added 9 million sq. ft. of supply in the third quarter – much of it on a speculative basis – causing a slight uptick in vacancy but underscoring the overall health of the market, according to the newly released “Third Quarter 2019 Market Peek” from NAI Hiffman, a real estate services firm.

The Chicago area’s overall industrial vacancy rate ticked up to 5.63% from the five-year low of 5.43% seen in the second quarter, the result of a robust construction pipeline that brought 7.3 million sq. ft. of speculative warehouse space to market in the third quarter, much of which was vacant at the time of delivery, according to NAI Hiffman data.

Yet with several large lease transactions expected to close by year’s end and year-to-date absorption totaling an impressive 15.4 million square feet – up 37.4% from the first three quarters of 2018 – NAI Hiffman expects the rise in vacancy to be an anomaly rather than the start of a trend.

“While a large amount of speculative space was added to the market all at once in the third quarter, partly because of weather conditions delaying construction, we’re confident the new product will quickly be absorbed,” Amanda Ortiz, director of research for NAI Hiffman, said in a statement. “Users across a variety of industries have demonstrated that they’re willing to pay a premium for Class A product that offers proximity to labor and is capable of accommodating robotics and other emerging technologies that streamline day-to-day operations.”

Other notable stats from the third-quarter report include:=