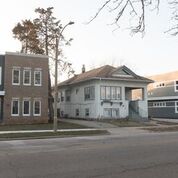 Four new small-scale apartment buildings in Maywood that were designed especially for people with disabilities are now ready for tenants, thanks to a unique partnership between IFF and the Cook County Land Bank Authority.
Under its Home First initiative, IFF creates scattered-site housing for people with a broad range of disabilities. IFF built the housing on four vacant purchased from the Cook County Land Bank Authority in October 2018 for $7,500 each. This month tenants are expected to begin moving into the buildings, which together house a total of 12 apartments.
“IFF is particularly proud to make available housing that’s accessible, affordable and community-integrated for people with disabilities,” said Dena Bell,” IFF lead developer.
The Land Bank helped IFF identify and acquire the vacant lots for the housing at an affordable price, cleared the titles and back taxes on the lots and kept the lots clean until IFF was ready to build on them.
“Working with the Land Bank simplified our site acquisition work and made our process more efficient,” Bell said.
That’s exactly the kind of result the Land Bank aims to have when redeveloping abandoned land and property. “Partnering with IFF to bring housing to this village that’s not only affordable but accessible has been a boon for us,” said Rob Rose, executive director of the Cook County Land Bank Authority.  “Freeing up land and empowering local developers and communities to determine how to best redevelop it is exactly the sort of partnership we want to have.”
The new housing benefits not only the new tenants but the surrounding community as well, Bell said.  “Bringing vacant lots back to life is something this community really supports. What’s more, this project provides a much improved quality of life for the individuals who will live here.”
-More-
The apartments are housed in four two-flat buildings along a cluster of three blocks on Fifth Avenue. Because the apartments are in small buildings, they help fill a void in small-scale accessible housing in community settings.
“A lot of developers were building affordable housing in large developments and usually had a portion of the units in those developments that were accessible,” Bell said. “But no one was addressing accessibility in small-scale community developments. So we decided to put our resources together to build small-scale accessible housing for people with all kinds of disabilities and have them be integrated across communities in neighborhood settings.”
The new Maywood properties represent the first scattered-site development that the Land Bank has helped initiate. Usually, the Land Bank sells land sites to local developers who normally build just one single-family home on a parcel. The Land Bank’s partnership with IFF yielded 12 new one- and two-bedroom accessible apartments.
Each of the new two-flat buildings include three accessible apartments.  The two first-floor
apartments in each building are wheelchair accessible, with features like roll-in showers,
roll-up workspaces, and casement windows that open outward to minimize lift weight.
Second floor units have accessible workspaces, grab bars and audio-visual alarms.
All apartments are equipped with a side-by-side washer and dryer. The apartments are conveniently located just minutes away from Loyola University Medical Center and directly on a Pace bus route.
IFF is a mission-driven lender, real estate consultant, and developer that helps communities thrive by creating opportunities for low-income populations and individuals with disabilities. Since 1988, IFF has provided $907 million in flexible, affordable financing to nonprofits serving a variety of sectors – affordable housing, health care, education, community development, and more.
The Cook County Land Bank Authority, an independent agency of Cook County, was founded by the Cook County Board of Commissioners in 2013 to address residents and communities hit hard by the mortgage crisis. CCLBA gives local developers, community groups and potential homeowners the tools to transform their own communities from within.
The Land Bank acquires properties that have sat tax‐delinquent, abandoned and vacant for years and sells them at below‐market rates to qualified community‐based developers, who then rehab the properties. This approach not only keeps revenue and jobs in the community, but it also helps local developers grow their businesses. Learn more about the Cook County Land Bank Authority athttp://www.cookcountylandbank.org or call 312-603-8015.