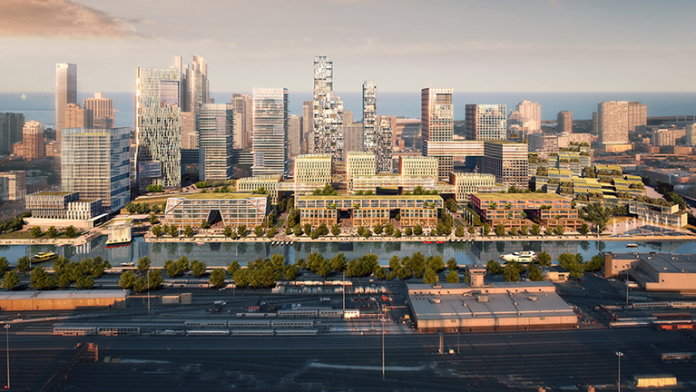 The State of Illinois is moving forward with $500 million in capital funding for the University of Illinois System’s Illinois Innovation Network (IIN) and Discovery Partners Institute (DPI) – a network of research and innovation hubs that will serve as a magnet for technology and talent.

“We are launching a new era for Chicago as an extraordinary focal point for an unparalleled tech workforce and research and development that will attract talent to our state from around the world, strengthening Illinois’ long-term economic vitality for generations to come,” Pritzker says.

IIN and DPI plans to construct headquarters in a 62-acre mixed-use development south of the city’s downtown along the Chicago River. The area has been named “The 78.”

From that location, DPI will serve as a nexus for students, university faculty and Illinois corporations. The IIN hubs will provide entry to communities across the state for ideas and innovations generated at DPI, while also leveraging the strengths of Illinois’ public universities to ignite the state’s economy.

IIN and DPI have a goal of preparing students and workers for lucrative, high-tech jobs, and increasing funding for the applied research and development that will create more of those careers.

At the same time, IIN and DPI seek to increase the diversity of the new economy workforce in Illinois.

The state funding will enable DPI and other hubs of the IIN across the state to begin architectural design work while attracting more private funding from corporate partnerships and philanthropy.

Projects planned at the IIN hubs will apply technology to create new opportunities related to agriculture and food systems, manufacturing, transportation, health and wellness, the environment, and entrepreneurship.

Partnerships have also been established with 12 universities and research institutes in the United States and abroad, including Argonne National Laboratory, Cardiff University, The Hebrew University of Jerusalem, all three U of I System universities, Illinois Institute of Technology, the University of Chicago, MS Ramaiah Medical College, Northwestern University, National Taiwan University and Tel Aviv University.