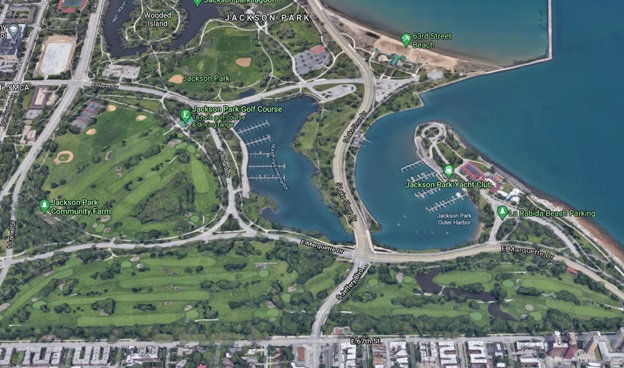 Mayor Lori Lightfoot has announced the beginning of the pre-construction work in Jackson Park.

Preliminary work includes relocating utility lines and other necessary steps ahead of construction on the center which is expected to start in the latter half of the year.

This infrastructure work follows a years-long process to gain federal approval for city initiatives supporting the Obama Presidential Center (OPC) on Chicago’s South Side. In February, final determination came from the National Park Service and Federal Highway Administration that the federal actions requested by the city in support of the development of the OPC and the roadway improvements being considered would not have a significant impact on the environment.

The Chicago Department of Planning and Development, Department of Housing, Department of Transportation (CDOT), Park District and Public Library will move forward with several capital investment projects in the surrounding communities that will support economic development opportunities in the community. The Obama Foundation is expected to start construction of the OPC in the second half of this year.

CDOT has developed a plan to improve the safety and comfort for all modes of travel, with an emphasis on people walking and biking to and through Jackson Park. The plan will provide more and better-connected green space in Jackson Park by closing roadways, including Cornell Drive between Hayes Drive and 59th St., and replacing them with park paths that connect to new wide, well-lit underpasses that eliminate the need to cross roadways such as Hayes Drive when moving through the park.

The CDOT will install a series of strategic safety and operational improvements by adding lanes on Lake Shore Drive and Stony Island Ave., closing roads interior to the park (starting with South Midway Plaisance this summer), and providing spot improvements at existing bottlenecks. These improvements will include new and modified traffic signals, new crosswalks and accessible pedestrian signals to improve access to Jackson Park, and travel times will remain relatively unchanged once all improvements are complete. The CDOT’s construction work is anticipated to begin later this summer, starting with Lake Shore Drive. The initial transportation improvements will be funded through a larger $174 million source of funds programmed by the State of Illinois.

The design also includes off-street trail and pedestrian underpasses improvements based on recommendations from the Streets for Cycling 2020 Plan to extend the existing network of trails in Jackson Park, providing ability to travel throughout Jackson Park on bike or foot on off-street trails that will go underneath street with wide well-lit underpass crossings.

The Chicago Park District will begin necessary utility work and mitigation measures including a design process for the Midway Plaisance, as well as move forward with a new track and field facility at the corner of Stony Island Ave. and 63rd/Hayes. The new running track, opening Summer 2021, will be constructed with a multi-use artificial turf field striped for soccer, football and lacrosse and newly installed sports lighting to allow for evening play.

The park district will also begin the design and community outreach process on several other projects in the South Lakefront Framework Plan including renovating the Iowa Building, relocating the Jackson Bark dog-friendly area and renovating the ball diamonds west of Cornell Drive.