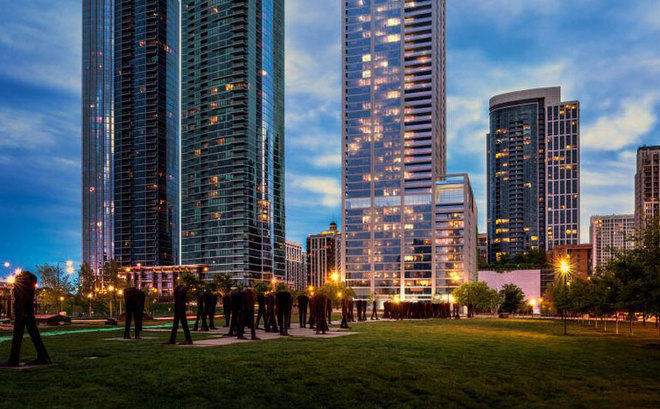 Several Chicago real estate media outlets reported on the discovery of a planned project on a page labeled “Michigan & Roosevelt” on the multi-city developer’s website.

There also was a rendering of what could have been the building’s early design, or simply a website placeholder.

However, the rendering, and the page, have now disappeared from the site. So the reports here are speculative, at best.

Some media sources suggested the project would be designed by architect Rafael Vinoly, and the first major high-rise Chicago project for Vinoly’s firm.

“According to the high-rise watchers on the Skyscraper Page forums, the tower could rise up to 835 feet to the top of the parapet and 862 feet to the top of a decorative roof structure,” Curbed Chicago has reported. “If the building does indeed climb to that final height figure, it would be the tallest all-residential building in Chicago, provided nothing more than simple ground floor retail space is also included in the building. At 862 feet, 1255 South Indiana would also steal the title of tallest all-residential building from the already approved 451 East Grand project in Streeterville by Related Midwest and architecture firm Robert A.M. Stern which is expected to top out around 850 feet.”

Before Crescent Heights took down the page, it also listed 30,000 sq. ft. of retail and 1,900 units, although these figures likely also include a second building at the southeast corner of Michigan and Roosevelt.