A 90-ft-long enclosed sky walk that links a new office building to the core campus of United Therapeutics Corporation, a Silver Spring, Md., biotechnology company, has earned national recognition in the 2014 Innovative Design in Engineering and Architecture with Structural Steel awards program (IDEAS2). In honor of this achievement, the project’s entering architecture and engineering firm, EwingCole, Inc., Philadelphia, and members of the project team will be presented with awards from the American Institute of Steel Construction (AISC) during a ceremony at the pedestrian connector on Friday, August 22, at 11 a.m.

Conducted annually by AISC, the IDEAS2 awards recognize outstanding achievement in engineering and architecture on structural steel projects across the country. The IDEAS2 award is the highest, most prestigious honor bestowed on building projects by the structural steel industry in the U.S. and recognizes the importance of teamwork, coordination and collaboration in fostering successful construction projects.

The connector’s project team members include:

The United Therapeutics Pedestrian Connector is a Merit award winner in the category of projects Less than $15 Million, making it one of only eight projects around the country to receive the Merit honor. Each year, the IDEAS2 awards honor National and Merit award winners in three categories, based on constructed value: projects less than $15 million; projects $15 million to $75 million; and projects greater than $75 million. Each project is judged on its use of structural steel from both an architectural and structural engineering perspective, with an emphasis on: creative solutions to project’s program requirements; applications of innovative design approaches in areas such as connections, gravity systems, lateral load resisting systems, fire protection and blast; aesthetic and visual impact of the project; innovative use of architecturally exposed structural steel (AESS); technical or architectural advances in the use of the steel; and the use of innovative design and construction methods.

United Therapeutics’ campus in downtown Silver Spring includes multiple buildings within close proximity to one another in a mixed-use urban setting.

A new eight‐story, 100,000-sq.-ft office building was recently added to support the company’s existing laboratory and corporate headquarters functions. Due to site constraints, however, the new facility is separated from the core campus by a busy street. So, the design team proposed an enclosed skywalk to link both sites.

Completed in 2012, the $2 million connector spans more than 90 ft across the street and connects to the sixth floor of each structure, allowing unencumbered access to new conference rooms and dining and office areas. Architecturally, the initial design concept for the connector included a glass-clad circular cross section that increases in depth as the floor slopes, to accommodate a 4‐ft elevation change between the two buildings, while the top of the connector remains flat. As the project progressed, the full cross section of the connector was developed as a truss, with the walking path “floating within it.” This approach created a visually stimulating experience as pedestrians travel through the exposed, curving structural members, while also maximizing the structural efficiency of the connector.

Comprised of exposed 7-in. round hollow structural sections (HSS), the truss includes 11 HSS rings that follow the extended circular cross section of the connector and are spaced at 9-ft centers. Each ring includes two half-circular sections (top and bottom) with a 5-ft radius, separated by straight sections of varying length to match the slope of the floor slab. The rings are connected with eight HSS longitudinal chords that are located at the topmost and bottom-most points of the connector, at mid-height of the sides, and at 45° from each spring point of the top and bottom arched sections. HSS diagonals frame between node points created at the ring/chord intersections and follow the curvature of the ring members between nodes, resulting in diagonals that curve in two planes. Computer-controlled LED lighting traces the symbolic pattern of a DNA strand and reinforces the facility’s biotechnology focus.

The connector was designed to support a 100-psf occupant load on the walking deck, a 40-psf catwalk live load and loads due to snow, ice, wind, seismic and OSHA safety requirements for glass cleaning. AISC Design Guide 24 and AISC 360‐05 Chapter K were used to check all limit states of HSS members due to localized effects of round HSS connections. Welds were checked for the combined effects of bending and axial member end forces. Deflection and vibration serviceability requirements were carefully evaluated, and an expansion joint with a slide bearing connection was introduced at the one end of the connector to account for differential building movements due to thermal expansion and contraction and lateral loading conditions.

The fabrication of the 28‐ton connector required careful planning with as many as eight round members joined together at a single node, six of which are curving. The round HSS required elliptical end cuts of curved members that were then chamfered to accommodate varying dihedral angles for partial penetration welds. Qualification of welding procedures was required for round HSS partial penetration “K” connections that did not meet the geometry requirements for prequalified AWS welded joint designations. Qualification testing included transverse cutting of welded joint mockups and macro-tech testing of the weld cross sections.

Through close collaboration with the fabricator, the structural engineer suggested a staggered fabrication sequence that allowed assembly of the connector without cutting the diagonal members, and eliminated 80 full-penetration welds. Prior to fabrication, the attachment points to each building were surveyed to ensure that the connector would fit between the two buildings. The connector was fabricated and shipped in one piece from Mississippi to Silver Spring and erected in one lift by a single crane, with only 3 in. of clearance to the existing concrete structures at each end.

The 12 IDEAS2 winners for 2014 were chosen from nearly 100 submissions received from architectural and engineering and other project team member firms throughout the U.S. Each submission is reviewed and award winners are selected by a nationally recognized panel of design and construction industry professionals.

The IDEAS2 award dates back more than 70 years to the earliest years of AISC’s existence. And about this year’s winning pedestrian connector, Roger E. Ferch, P.E., president of AISC, said, “The entire United Therapeutics Pedestrian Connector project team has shown how structural steel can be used to create structures that combine beauty and practicality. The result is a structure that serves its function extremely well, while providing an example of what can be achieved when designing and constructing projects with steel.” 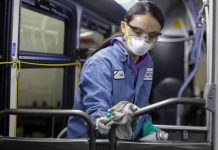