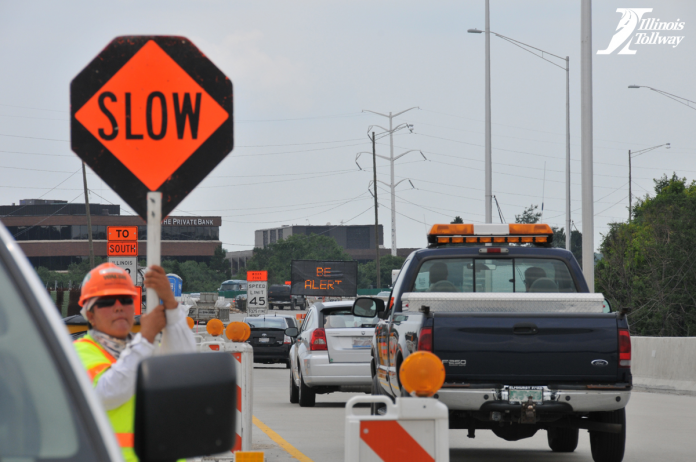 Recently, a police officer wasn’t just in an unmarked vehicle. Wearing a hard-hat, he was monitoring traffic from a Walsh Construction truck on an I-74 construction site near Moline, Quad City Times reported.

Master Sgt. Ron Salier, disguised as a construction worker, said: “We’re here to help each other out. We are enforcing the law but also educating the motoring public.”

“Locals understand we’re going to be out here, and they know exactly where we’re going to be sitting. So they make sure that they don’t do anything wrong in that one little spot,” Wilson said. “We want to make this construction zone safe for everyone.”

In just a few minutes monitoring eastbound traffic on I-74 between Avenue of the Cities and John Deere Rd, Salier recorded nine speeding violations.

“Speeds are reduced for a reason,” Salier said about the construction zone. “It’s for themselves, the safety of the driver.”

Over about a two-hour span, 10 traffic stops yielded 10 speeding warnings and citations, one seatbelt violation and two other equipment warnings, according to a State Police press release.

“It’s just like an undercover guy that would go in and buy drugs or something along those lines,” Wilson said about the camouflage. “There’s plenty of case law that shows there’s no actual restriction on what we actually need to (wear) for enforcement. No matter what we’re wearing, we’re still sworn police officers.”

Wilson said that Illinois State Police and Walsh Construction were in talks to work together again. Work-Zone Safety Week lasts from May 6 through May 10. “If that’s what it takes to make this place safer, that’s what we’ll do.”