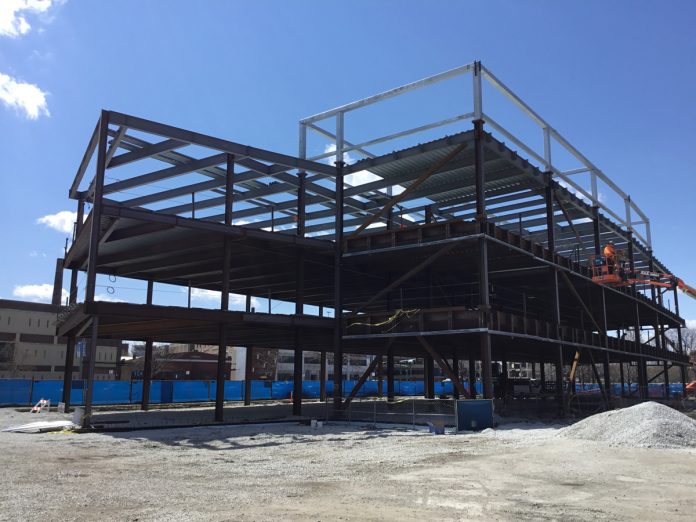 The Habitat Company, James McHugh Construction Co. and Bowa Construction say they have recently topped off off of a commercial and retail building that marks phase one of the $200 million Ogden Commons mixed-use project in Chicago’s North Lawndale neighborhood.

Habitat formed a public-private partnership with Sinai Health System, Cinespace Chicago Film Studios, the Chicago Housing Authority and the city of Chicago to develop the 10 acres along the 2600 block of Ogden Ave. on Chicago’s West Side. Upon completion, the project will include 120,000 sq. ft. of commercial and retail space and more than 350 mixed-income housing units.

“While COVID-19 kept us from celebrating with a traditional topping-off ceremony when the last piece of steel was placed in late April, we wanted to acknowledge how proud we are of the construction workers and subs for hitting this milestone on time and on budget,” The Habitat Company president Matt Fiascone said in a statement. “The construction of new medical facilities and affordable housing is more vital than ever for neighborhoods like North Lawndale that have been overlooked for too long. This building is just the first step to bringing new jobs, retail and housing to the community.”

“With the steel frame of Ogden Common’s first building now in place, the site is definitely coming to life and the surrounding community can feel the development’s momentum, which is important given this new time when so much of life feels like it’s on pause,” said Cisco. “It’s good for the area to see our team working on the building, and of course we’re trying to give back by using local crews through union sub-contractors.”

The SCB-designed building is scheduled for completion in January 2021,

The building’s ground floor will be occupied by Steak n’ Shake, Ja’ Grill and Wintrust Bank. The second and third floors will include medical office space leased to Sinai Health System for outpatient services. Cinespace Chicago Film Studios will also lease office space on the upper floors for its two nonprofit affiliates: Cinecares, which offers a job-training program in film production for disadvantaged youth; and Stage 18, a film industry incubator designed to expand Chicago’s talent pool in movie and TV production.

Located on land formerly occupied by the Chicago Housing Authority’s Ogden Courts and Lawndale public housing developments, Ogden Commons is being financed through a combination of debt and Opportunity Zone equity. PNC Bank funded $15 million of the $22 million development cost for the project’s first phase.