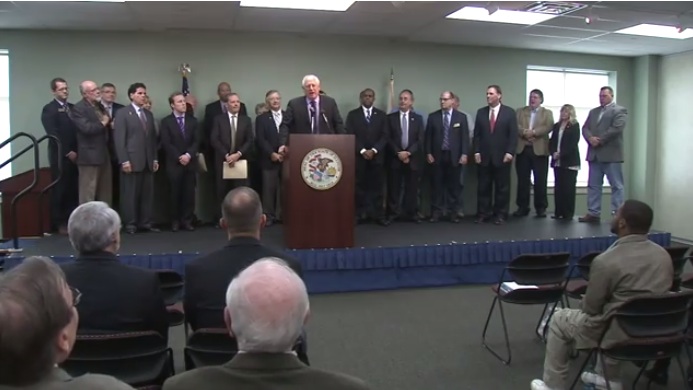 Governor Pat Quinn has announced a $35 million investment to build the Macomb Bypass under the $31 billion “Illinois Jobs Now!” program.

“The Macomb bypass is the final link in the project to improve transportation efficiency and safety in this key section of western Illinois,” Quinn said in a news release. “The project will also help create hundreds of jobs that will help drive the regional economy forward.”

The funds will be used to construct a six-mile-long two-lane northbound highway of the four-lane bypass planned to link U.S. Route 67 and Illinois Route 336/110 until the southbound lanes can be built when funds become available. The project also includes five additional bridges to carry Route 336 over County Highway 14, the Lamoine River and three minor streams, as well as bridges to carry Township Rd. 1100, Spring Lake Rd. and Tower Rd. over Route 336. The new section of highway will be built on the corridor now being created by an ongoing grading project. The construction of overpasses at Adams and Jackson Streets has been completed.

U.S. Senator Richard Durbin (D-IL) thanked his colleagues in Illinois’ Congressional Delegation for help in bringing $27 million of federal funding for the Macomb Bypass out of $39 million for road upgrades. “As this project nears completion, it will help connect western Illinois to the Midwest’s larger transportation network and continue to spur economic development throughout the region,” he added.

“I’m very pleased to see another piece of the Chicago to Kansas City expressway investment become reality,” said State Senator John M. Sullivan (D-Rushville). “When completed, this 50-year project will connect western Illinois to the rest of the country and this $35 million investment will improve our transportation infrastructure, create construction jobs and invigorate our area’s economy.”

The project will be out for bid by spring 2015.