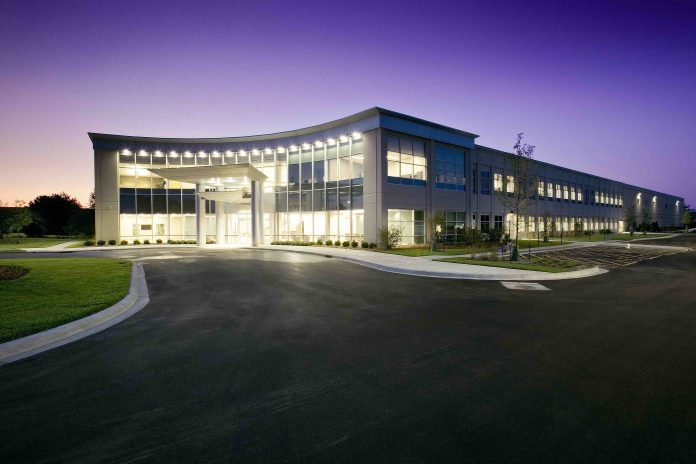 PREMIER Design + Build Group, LLC led the design + construction of a new corporate office for Echo Inc., a worldwide leader in the development and manufacturing of power equipment, at their business campus in Lake Zurich, IL. Construction of the state-of-the-art 51,000 sq. ft. office showcases a seamless integration with its existing industrial facility already in place.

After continued growth and expansion over the years, the company required a larger space for their corporate operations. Expansion to their existing office space wasn’t a viable option and would have been largely disruptive, not to mention much of the site is land locked and unavailable for construction. After careful review and consideration, a location was settled on for the new space along an alcove of an existing industrial building.

One of the biggest challenges was crafting a natural integration of building elements from the high-end corporate office to the industrial facility. A considerable amount of time and planning went into creating a well-designed gradation, beginning with a dramatic appearance at the corporate entryway to a more modest appeal toward the industrial segment.

A higher-grade architectural precast material was used in the new construction and was designed to maintain a parallel expression of color and style. The new corporate entryway features a prominent, two-story glass curtain wall, impressive exterior down lighting, a 2-tiered canopy and bold, modern cornice. At the industrial section, the cornice is reduced in scale, windows are smaller and lighting is artfully minimized.

Also included in the build-out are designated waiting areas, an executive boardroom with high-end finishes, areas for collaboration and a lunchroom. One of the most exciting additions to the new office is a training and conference area that can accommodate more than 100 people; it is built in modular fashion so that it can be used as one large space or sectioned down into as few as three smaller rooms. Design of the new corporate space allows for future growth and expansion.

“When faced with the design + build of Echo’s headquarters, our team went into creative problem-solving mode,” says PREMIER vice-president Mark Melone. “We know that Echo sets the bar very high when it comes to their own standards, so we delivered an office worthy of an industry leader. We were honored that they selected us for the project.”

The new corporate office marks the third major project PREMIER has constructed over the past 13 years.