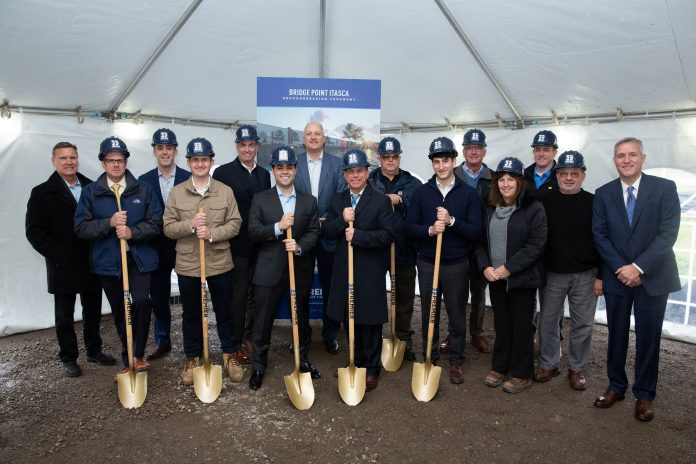 Back in July, PREMIER supervised the demolition of two decommissioned radio broadcast towers on the site. Also cleared from the site were two satellite buildings, a fuel oil tank, and concrete slab foundations. The demolition work paved the way for this new multi-use development at the southeast corner of Devon Avenue and Rohlwing Road.

The three industrial buildings are intended for use as state-of-the-art distribution/logistics centers. Each new facility will be constructed of precast concrete and steel and will feature high-end glass facades.

Each building will be constructed to offer a 32’ clear height.

Village of Itasca mayor Jeff Pruyn expressed his support for the project during remarks at the Oct. 30 groundbreaking ceremony. “This was the one parcel in Itasca that I never thought we’d get to have a groundbreaking on. We didn’t think there was a chance that the radio tower would come down, but now we are going to have a great facility here,” said Pruyn.

Nick Siegel, vice-president at Bridge Development Partners, explained that the project has special importance for him and his colleagues: “This new development is situated in our own backyard, so we are personally invested in its success. We are re-envisioning this site, transforming it into an important economic engine for the village of Itasca.”

PREMIER’s Michael Long said that his team is excited to be moving the project forward. “Just a few months ago, this site was under-utilized and a bit of an eyesore. Working with Bridge, we’ve completed the demolition of existing structures to create a clean slate. And now, we begin the work of giving this site new life and purpose.” The buildings are slated for completion in summer of 2020.

The broker for Bridge Point Itasca is Lee & Associates. Webster Bank and Associated Bank are the lenders.