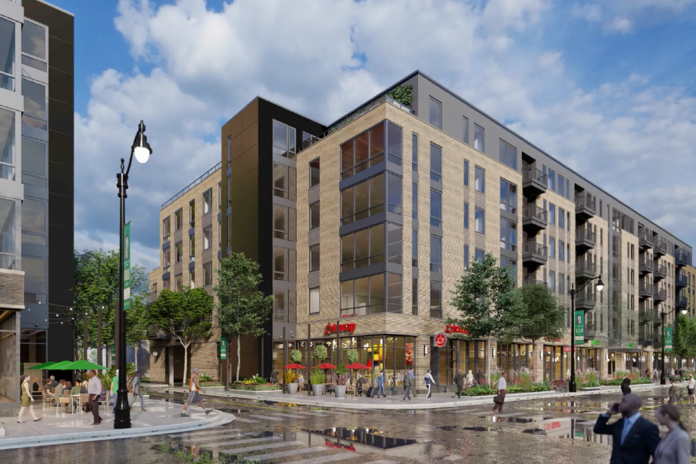 Permits were granted on Oct. 28 for the development’s first phase, a pair of six-story rental buildings at 2310 and 2344 S. State St. There will be 206 rental apartments with 68 units reserved for Chicago Housing Authority (CHA) households, 28 offered at an affordable rate, and 112 at market-rate.

Architect of record Nia Architects and design architect Antunovich Associates have incorporated residential amenities into the project, as well as 2,000 sq. ft. of ground floor community space including a demonstration kitchen and classrooms.

There will be infrastructure improvements including new sewers, the reconstruction of 23rd, 24th, and Dearborn streets and a new roadway named 23rd Place.

The Southbridge development will rely on a variety of funding sources, including tax-increment financing (TIF), affordable tax credits, and other equity sources.

“This project is the result of a fantastic public-private partnership with the CHA, Illinois Housing Development Authority, and the city of Chicago,” says Christopher Johnson, Johnson, a Community Builders project manager. “It couldn’t have existed without our public partners.”

The planned second and third Soutbridge phases will extend to the blocks north and south of phase one and includes a 13- and 22-story residential building near the Cermak Green Line station.

The Southbridge parcel has been vacant since the 1950s-era Ickes Homes were demolished in 2009 to 10.. The CHA launched a search for redevelopment partners in 2014 and selected the Community Builders the following year. The Chicago City Council approved zoning for Southbridge last fall.