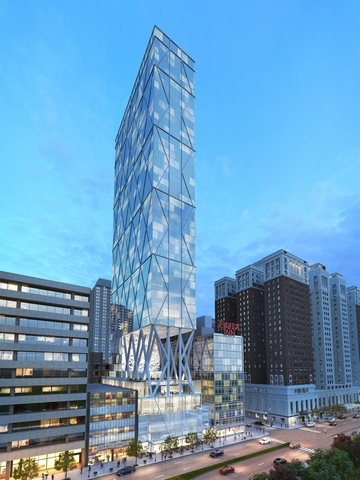 The developer submitted plans Sept. 24 with the city for a high-rise with 388 units. Oxford Capital was the fourth developer that week to seek approval to the city for a new residential building on the boulevard.

According to Crain’s Chicago Business Chicago Real Estate Daily, a real estate group wants to build nearly 3,000 units in a five-block area at the southern end of Grant Park. About a block south of the Essex Inn, a pair of New York developers has proposed the biggest of the bunch: an 86-story, 506-unit condominium/apartment tower being designed by Helmut Jahn.

The designer for the Oxford tower will be Hartshorne Plunkard Architecture and the project would stand where the Essex Inn’s parking garage and swimming pool sit now, according to a zoning application.

Oxford is developing the tower in a joint venture with Quadrum Global, a private-equity firm.

The Oxford venture owns the 245-room Essex Inn and controls the property underneath through a long-term lease with the land owner, a partnership led by South Barrington investor Robert Storm.

The project would represent something of a shift for Oxford, which has focused mainly on hotels. Its recent Chicago developments include the Godfrey Hotel and Hotel Felix in River North and the LondonHouse, a 452-room hotel set to open next spring at the corner of Michigan Ave. and Wacker Dr.