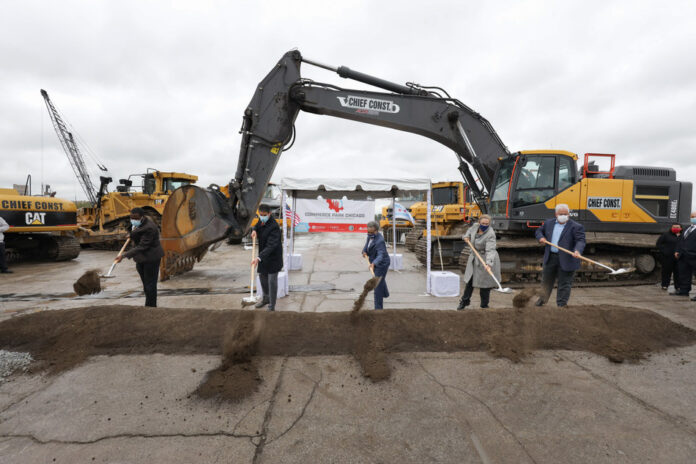 Political and business leaders gathered Sept. 28 for the groundbreaking of the $164 million Commerce Park Chicago industrial campus’s second phase on the site of the former Republic Steel plant in the Hegewisch neighbourhood.

A statement from Mayor Lori Lightfoot’s office says the 200-acre industrial park will house 2.3 million sq. ft. of light manufacturing, assembly and logistics space on the city’s far Southeast Side and would create 500 construction jobs.

“Our city, particularly our Southeast Side, has long been a hub for industrial and manufacturing innovation,” Lightfoot said. “This impressive Commerce Park Chicago campus will not only build on this history and reputation, but it will also provide much-needed, good-paying, and sustainable jobs for our residents. I am proud to partner with Ford and NorthPoint on this exciting project and look forward working with them to restore the economic vibrancy of our city’s Southeast Side for decades to come.”

Republic Steel’s Chicago plant began operations in 1910 and by the 1970s employed nearly 6,000 people. By the 1980s, less expensive, imported steel became more popular, and the plant, which once produced over 400,000 tons of steel annually closed permanently in 2001 and has remained vacant for nearly 20 years.

NorthPoint is committed to reestablishing the site as a hub for employment and worked closely with Ald. Garza to ensure that local employers, sub-contractors and residents had direct access to job opportunities. “NorthPoint negotiated a comprehensive Project Labor Agreement with local unions and participated in a community Apprenticeship Expo for more than 500 neighborhood residents. NorthPoint also worked with the City of Chicago to implement WBE/MBE participation programs that surpassed the city’s goals, bringing more opportunities for Chicago-based women- and minority-owned businesses,” the statement said.

“NorthPoint believes in Chicago, the State of Illinois, its people and communities,” said NorthPoint Founder and CEO Nathaniel Hagedorn. “When we started this project, we saw the potential of the City and the Southeast Side. Commerce Park Chicago represents the best in public-private projects and shows the value of what we can accomplish by working together. Our mission is to partner, build and manage employment hubs in ways that are both responsive to community needs and attractive to quality tenants. This win-win formula creates quality jobs, contributes to the stability of the local economy, and benefits the entire community.”

Ford Motor Company is Commerce Park’s first tenant and will use the completed 360,000 sq. ft. building on South Avenue O for pre-assembly work on components that will be delivered to its nearby Chicago Assembly Plant on Torrence Avenue, which was also developed by NorthPoint.

The statement from Lightfoot’s office says the event “underscores Mayor Lightfoot’s commitment to bringing jobs, opportunities and resources to all of Chicago’s 77 neighborhoods”, especially on the city’s South and West Sides. which target small business development in commercial corridors in underserved neighborhoods.

For more information and to apply please visit neighborhoodopportunityfund.com.