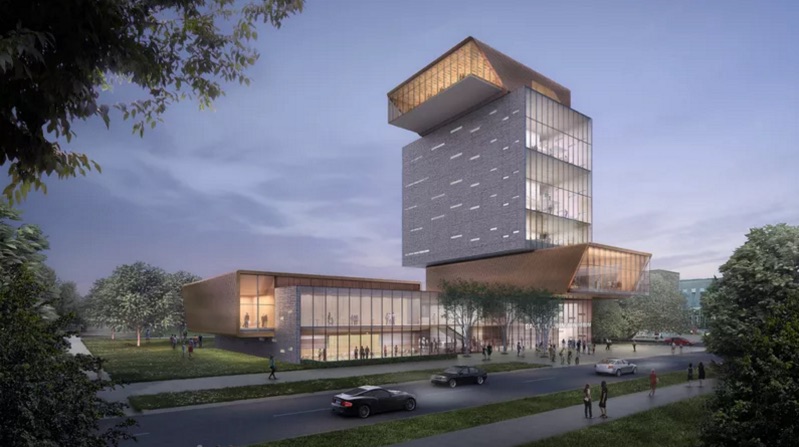 Diller Scofidio + Renfro (DS+R) has unveiled its design for the David M. Rubenstein Forum at the southeast corner of Woodlawn Ave. and 60th St. on the University of Chicago’s campus. The 90,000 sq. ft. facility has been devised as a place of intellectual, institutional, and educational exchange, fulfilling a variety of campus needs for meeting spaces. A collection of block-like volumes, the building’s two-story base is anchored by a narrow 165-ft. tower, with the exterior materials and structure reflecting the programmatic divisions within.

Above, in the building’s tower portion, a north-facing 265-seat auditorium dubbed the Presentation Hall will be supplemented by a top-floor, multipurpose space facing east — aptly referred to as the Lake View Room. The upper levels will also contain smaller rooms that can be reconfigured to accommodate the needs to different groups, Curbed Chicago reports.

According to “For those of us involved every day in convening groups on campus and in organizing meetings and events for guests from around the world, the Rubenstein Forum fulfills a critical need for the University,” said the university’s executive vice-president David Fithian. “Too often events hosted by the university are held in other parts of Chicago, and our guests are denied the opportunity to experience the intellectually dynamic and beautiful campus that we have in Hyde Park.”

Elizabeth Diller, founding partner at DS+R, told UChicagoNews: “We composed the tower as a stack of ‘neighborhoods’ with meeting and communal spaces of all sizes — both formal and informal, calm and animated, focused and diffuse. The building prompts its varied populations to cross paths with one another where possible to enhance intellectual exchange.”

The building will be built on a vacant lot and where the Mott Building is currently being demolished on 60th Street between Kimbark and Woodlawn avenues, DNAInfo reports.