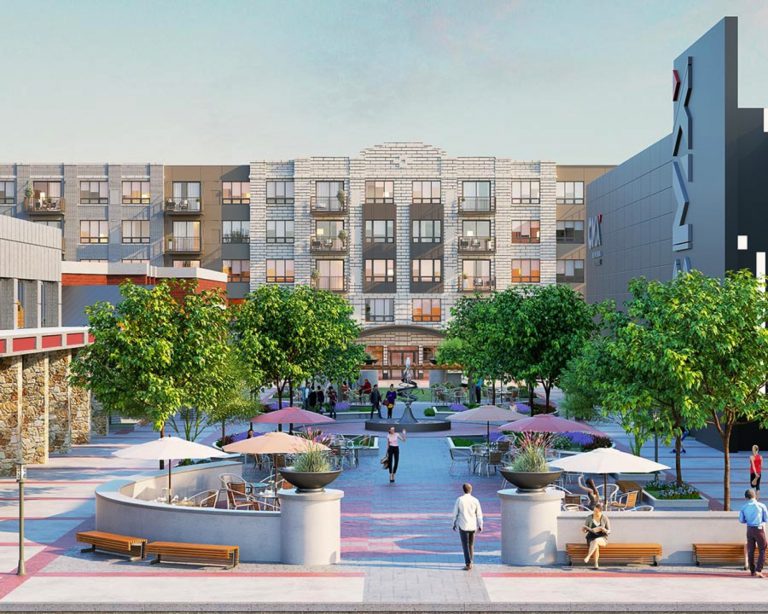 A new mixed use Wheeling Town Centre is being developed that will include a 300-unit apartment, plus 100,000 sq. ft. of commercial space to include retail, dining and, as an entertainment ancho, a 40,000 sq. ft. 10-screen CMX Theatre.

The project has been designed by Callison/RTKL and is being constructed by William A. Randolph for developer Lynmark Group.

Chicago Architecture describes the residential block as “a five-story building that features a hipster-compliant bocce court, family-friendly pool, and balconies all around.” It also includes a firepit, BBQ grills, a covered gazebo, a putting green, lounge areas, fitness and yoga rooms and pergola covered dining among its amenities.

A media release shared by the site says “at the core of the Town Center will be a large pedestrian-friendly plaza” which will connect tenants and visitors to the commercial spaces.

Set to be completed in the fall of 2018, the release says Lynmark’s $100 million investment “will only compliment the significant investments the Village of Wheeling has made to modernize and expand neighboring park, sports and municipal facilities.”

Construction begins on next phase of Lakefront Trail Separation project