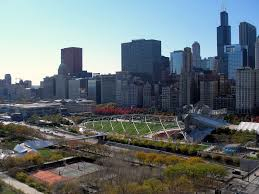 The Urban Land Institute has announced that Chicago’s Millennium Park is one of six international finalists in its global Urban Open Space Award competition that recognizes outstanding examples of successful large- and small-scale public spaces that have socially enriched and revitalized the economy of their surrounding communities.

“The park represents a model for successful regeneration right at the urban core providing a place for Chicagoans and tourists to enjoy a broad variety of free public events through an engaging community experience,” the ULI announcement said.

An international jury – representing several facets of development expertise including finance, architecture, land planning and development, public affairs, design, and professional services – will select one winner later in the year.

“The submissions from this year are representative of how quality urban open space has become more than just an amenity for cities,” said jury chair Michael Covarrubias, chairman and chief executive officer of TMG Partners in San Francisco.  “The international diversity of the projects is reflective of how developers continually work to meet global demand by the public for the inclusion of healthy places in cities.”

The winning project is scheduled to be announced at the ULI Fall Meeting, set for October 5-8, 2015 in San Francisco, California. A $10,000 cash prize will be awarded to the individual or organization most responsible for the creation of the winning open space project.

The six finalists were selected from an impressive collection of entries, representing urban areas from across the globe. While landscape architecture and urban design were factors in the judging, the jury selected finalists based on a broader set of criteria, including overall project design and how each impacted or revived their surrounding areas.

The ULI awards citation page says the park, located at the northwest corner of Grant Park “transformed 16.5 acres of rail lines and a surface parking lot and another eight acres of shabby park land built on top of a deteriorated underground garage into a unique outdoor cultural venue. It was built on top of two new underground parking garages, a commuter rail station and a bus roadway making it one of the largest public roof landscapes in the USA.”

It is a place for Chicagoans and tourists to enjoy 80 annual outdoor major concerts, gardens, ice skating, restaurants, festivals, fairs, fountains, water features and interactive public art and it is all free.

Millennium Park’s many “enhancements” were funded by an extraordinary public/private partnership. The city’s $270 million commitment which was used to provide the park’s infrastructure and the private sector raised $220 million from individuals, foundations, and corporations. The private investment provided the park enhancements and included an endowment of $25 million. The park is ten years old and the annual visitation to the park has grown each year and is now in excess of 5 million.

The award was created through the generosity of Amanda M. Burden, former New York City Planning Commissioner and 2009 laureate of the ULI J.C. Nichols Prize for Visionaries in Urban Development.  In 2011, the Kresge Foundation, MetLife Foundation, and the ULI Foundation joined forces to continue the Urban Open Space Award through 2015. For 2015, ULI reaffirmed its commitment to the award and announced it would expand the program to global submissions.

To be eligible for the competition, an open space project must have been opened to the public for at least one year and no more than 15 years; be predominantly outdoors and inviting to the public; provide abundant and varied seating, sun and shade, trees and plantings with attractions; be used intensively on a daily basis by a broad spectrum of users throughout the year; have a positive economic impact on its surroundings; promote physical, social, and economic health of the larger community; and provide lessons, strategies, and techniques that can be used or adapted in other communities.