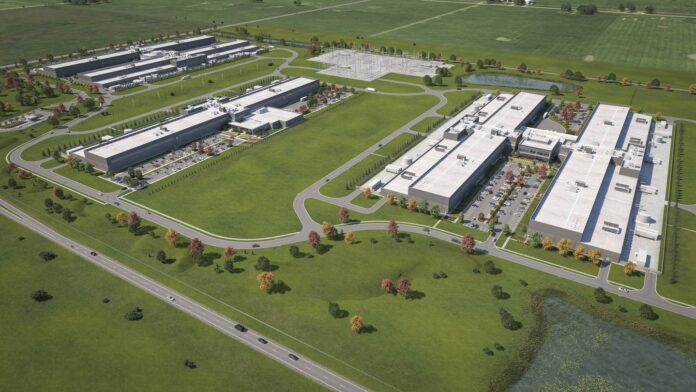 Meta (formerly Facebook) is making further expansions to its massive $1 billion data center in DeKalb. The social media giant co-ordinated a media event on April 27 to demonstrate its commitment for the 2.4 million sq. ft. project in the town west of Chicago.

“This is a global scale production, but it’s all those subcontractors of the contractors,” DeKalb mayor Cohen Barnes said. “The ripples of economic impact of this particular project itself go way down to a lot of businesses in our community, all the supporting construction, the restaurants that have done catering out here, you name it.”

The data center is scheduled to open in 2023.  The five-building complex will be one of 17 Meta will operate across the U.S.

“This is the physical backbone of all of our apps and services,” said Meta spokesman Tom Parnell.The expansion, will make the DeKalb data center one of Meta’s largest facilities, and an integral part of its ambitious plans to expand its social media platforms into an immersive virtual reality experience, he said.

The DeKalb data center broke ground in 2020, starting with two buildings that are now 70% complete, Parnell said. Construction on the three additional buildings began in January, and the infrastructure buildout at the sprawling 505-acre site is expected to be finished in 2023.

The Chicago area is tied with Atlanta as the fourth-largest data center market in the world, behind Northern Virginia, Silicon Valley and Singapore, according to a new study by Cushman & Wakefield quoted by The Chicago Tribune. “The study cites low cost of land, a robust development pipeline and lower power costs than most large data centers as advantages for Chicago,” the newspaper reported.

Sizeable government incentives are a factor in the growth of the data center business. For example, Illinois created the Data Center Investment Program in 2019, allowing an exemption from state and local sales and use taxes for companies that invest at least $250 million and create 20 new operational jobs in a data center.

Meta says it is partnering with the University of Illinois at Urbana-Champaign to develop a more sustainable concrete mix for construction. Meta has also invested in two new wind energy projects in Morgan and DeWitt counties, looking to support the DeKalb data center with 100% renewable energy, the published report says.

Construction to begin on 12-story office building in Fulton Market