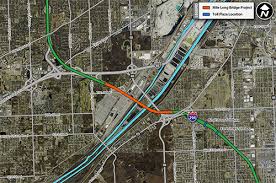 Massive concrete beams that will be used for the Mile Long Bridge along the Tri-State Tollway’s heaviest-traveled section are getting police escorts from a Wisconsin factory to a tollway plaza in Chicago’s southwest suburbs.

Transport trucks hauling the 187-foot-long, 245,000 pound beams will be traveling this week between 4:30 a.m. and noon on weekdays, weather-permitting.

Between 75th Street and I-55 and between Archer Avenue and the Des Plaines River, traffic in both directions is shifted through 2020.

The beams are being shipped from a County Materials factory in Janesville, Wisconsin and they will be used in the $4 billion rebuilding and re-widening of Interstate 294 near O’Hare International Airport, the Chicago Tribune reported.

The Mile Long Bridge Project includes construction of two new bridge structures that will increase capacity from four lanes to five lanes in both directions as part of the Central Tri
-State Project.

In addition, the inside shoulders will be built to serve as flex lanes, which can be used for a variety of safety-related needs. Currently, up to 150,000 vehicles travel on the Mile Long Bridge daily.

The new Mile Long Bridge will include two, side-by-side 4,800-foot-long structures. The design of the new structures took into consideration the sensitive aquatic ecosystem, navigable waterways and existing railroad and roadway operations underneath the structure.