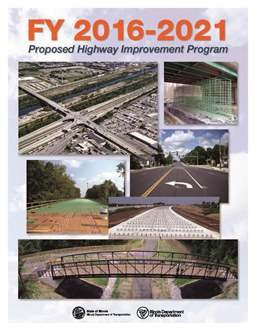 The Illinois government has proposed spending $8.4 billion on roads and bridges between 2016 and 2021 — more than $1.1 billion less than the state roads program for fiscal 2014-19.

“While 83 per cent of the state maintained highway mileage and 93 per cent of our bridges are in acceptable condition today, based on the latest available data, in FY (fiscal year) 2017 and beyond, annual program levels will decline significantly,” reports the Illinois Department of Transportation’s FY 2016-2021 Proposed Highway improvement Program. “Without action, IDOT estimates a significant decline in system condition. By FY 2021, the percentage of state-maintained highway system mileage in acceptable condition will drop by 21 per cent, and only 86 per cent of our bridges will be in acceptable condition.” This means, while the IDOT will focus is limited resources to maintain safe bridges, highway standards will decline to 62 per cent “acceptable” level in the next six years.

“IDOT revenue projections do not provide much hope moving forward,” the department’s improvement plan reports. “On the federal end, the Highway Trust Fund’s health is in serious doubt, and infusions of general funds have been required to keep it functioning.  IDOT anticipates declining Motor Fuel Tax revenue collections, resuming a long-running trend, and Motor Vehicle Registration fees for highway use are expected to remain stagnant.”

There are no major Chicago projects in the state highway spending plan.

No major Chicago projects have been included in state highway spending plan. During the next six years, the six-county Chicago area is expected to receive about $2 billion for its 1,446 bridges and 2,774 highway miles.

Work will continue on the $475 million  Jane Byrne Interchange overhaul, with the project to be completed in 2019, IDOT says.

Acting Illinois Transportation Secretary Randy Blankenhorn has been quoted in the Chicago Tribume as saying it will be hard enough to maintain the existing system. He said it will be “extremely difficult” to take on any new projects aimed at building new state roads and reducing traffic congestion on existing highways and arterial streets maintained by the state.

One reason for the decline is that the $31 billion in funding under the former Quinn administration’s six-year Illinois Jobs Now! capital construction program has ended.

Gov. Bruce Rauner is responding to the harsh realities of the state in its current fiscal climate, said Peter Skosey, executive vice president of the Metropolitan Planning Council, a nonprofit group that promotes solutions for regional growth in the Chicago area, the Tribune reported.

“Rauner, the General Assembly and I think everybody is in pretty uniform agreement that the state of Illinois needs more dollars for capital improvements,” Skosey said.

He said IDOT acting secretary Randy Blankenhorn, who led the Chicago Metropolitan Agency for Planning before Rauner appointed him to head IDOT, has emphasized the need for a long-term sustainable revenue stream, “not one that is sort of fits and starts, giving five years of funding and then goes dry.”

The Tribune quoted Skosey as saying the statistics about the number of bridges in poor shape and the miles of roads that need repair are paralleled “across every infrastructure class — schools and water mains and everything.

“The state and the country have just deferred maintenance on infrastructure far too long,” he said.
Skosey pointed to serious discussions in Springfield on passing a new capital bill aimed at infrastructure investment, building the Illinois economy and attracting more businesses and jobs to the state.

“Pensions, deficit, infrastructure are the top issues (state lawmakers) must resolve” before the current legislative session ends May 31, Skosey said.

The full IDOT highway program is online at goo.gl/gLOqt7.