Organized labor leaders will celebrate that Illinois comes dead last in a ranking scale, the Associated Builders and Contractors (ABC) Merit Shop Scorecard, which ranks the state’s adherence or avoidance of issues related to the interests of the non-union contractors association’s values.

Not surprisingly, ABC ranks states negatively if there are Project Labor Agreements (PLAs) and prevailing wage requirements, and positively if it has so-called Right To Work legislation.

Here are the criteria in the ABC’s evaluation system. Clearly Chicago and Illinois are on the “losing” side of most categories, but this loss presumably would not be a problem for labor unions and unionized contractors.

Every state received a score in each of the following seven categories measuring critical laws, programs, policies, and statistics impacting the merit shop contracting community. An overall comparative ranking was then assigned to each state by considering all measured categories, with particular emphasis given to the first three criteria of project labor agreements, prevailing wage, and Right to Work state laws and/or executive orders. Ties in combined score were broken by performance on ABC core issues and a consideration of the other scored criteria grades. 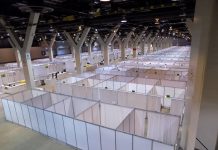 NIMBY in the West Loop: Developer struggles to win support for...