As Chicago’s skyline grows and changes in an extended commercial real estate boom, we need to make sure that the opportunities created by construction projects from Lincoln Yards to the O’Hare 21 Program lift everyone in the city — including black women and girls.

Construction is a traditionally white, male dominated industry, but that is no longer working. In the United States alone there are 31 million job openings in construction-related fields, and skills shortages could choke economic growth. We need to be proactive to make the opportunity of good construction industry jobs available to all Chicagoans.

The stage is set: We have already made game-changing choices by electing top female leadership with Mayor Lori Lightfoot and several other black women who now hold political office in the city and county.

The Illinois state capitol and U.S. capitals also have black female Chicagoans at the forefront of trailblazing efforts in elected leadership posts. Finally, Chicago’s philanthropic community has black women at the helm of several key foundations – many of which serve girls and women – that are working to improve the lives of ALL Chicagoans and create equity for women and girls.

But even as there have been diversity successes in the political and nonprofit sphere, we need to play the long game when it comes to industries where male dominance might make it difficult for a young black girl to break in. We need to start early. By early, I mean in high school and even elementary school.

Think about it: Before a current ten-year span construction development is completed, a current high school freshman could be effectively prepped to join the workforce as a 22-year-old apprentice journeywoman. And who knows? In ten years, even a current middle school girl could be on a career pathway as a young contractor preparing to become an industry CEO. She will be helping to build the city’s newest developments and leading the way in continuing to shape the industry into a more inclusive workspace for women.

In Chicago there are numerous major construction projects spanning at least ten years of development, including the Obama Presidential Center, Lincoln Yards, The 78, O’Hare 21 Program, Red Purple Modernization Project, and the Tollway Capital Program. Accordingly, Mayor Lightfoot has begun to roll out an investment plan that will boost the economies in the city’s South and West side neighborhoods.

As a member of the U.S. Congressional Caucus for Black Women and Girls and founder of Polished Pebbles, a 10-year-old girls mentoring nonprofit that’s served over 3,000 girls of color from Chicago and Indiana to North Carolina and Texas, I’m well versed on the implications that would be possible if we make this lucrative sector available to minority girls.

If we are willing to work and spend and plan for a decade to build a building, we should be willing to take that same time, effort and money to build up an entire generation of young black girls.

Career opportunities in the construction industry would present girls from disenfranchised communities with a clear pathway into the middle class and a promise of economic security that could be significant enough to break the school-to-prison pipeline.

To be sure, some folks would prefer that business and industry interests lay off of our kids while they are in their most formative early years. But as anyone who has attended a middle school “career day” can tell you, kids are hungry to envision their place in the working world.

We shouldn’t expect that any girl would desire a career in the heavily male dominated construction industry unless she’s presented with credible female role models that look like her very early on in her school years. As Marian Wright Edelman, founder of the Children’s Defense Fund, said, “You cannot be what you cannot see.” Young girls need to see, interact with, and be encouraged by real life role models.

Girls also need to know that if they enter this world they will be trained, mentored, and advocated for by organizations like Chicago Women in The Trades (CWIT), whose aim is just that. Women like Chynna Hampton, a Construction Manager at Chicago Transit Authority; Pamyla Brown, Community Engagement Manager of Turner Construction; Jill McCall, Executive Vice President of Mechanical Contractors Association; and construction company CEOs like Stephanie Hickman of Trice Construction are great examples of who and what they can become.

To successfully recruit and retain black girls in this white male dominated industry, the investments must be significant and include commitments from a variety of stakeholders to strategize and develop a long-term pathway to successful careers in construction. And considering the cultural, social, and economic barriers that they may be up against, these efforts can’t start in college.

For this pathway to work, we have to start helping girls fall in love with science and math from about third grade. Developing skills and confidence in STEAM subjects from third grade on will result in girls having more positive perceptions of technical careers in construction and trades like carpentry and welding.

The reality is that every girl may not be interested in getting her hands dirty on a construction site, however, there are so many different positions in the industry and they should be introduced to them all. Assistant Engineers, Project Managers, Supplier Diversity Compliance Officers, and Sales Operations Managers are just as important and well-compensated as front-runners.

Our young girls aren’t the only ones who need convincing — We’ll also need parents to buy into the potential success their daughters can realize in this industry. To achieve this, it will be critical to create campaigns educating parents on the variety of possible career paths and economic benefits that would come with them.

Early education programs geared towards shedding more light on careers for women in construction would allow girls to gain confidence and passion for developing the necessary academic and technical skills to succeed in any endeavor. Engagement with female role models of color that work directly in the industry can allow them to imagine overcoming obstacles themselves. They will glimpse the promise of a career that can help them bypass violence in their communities with a viable economic opportunity and develop necessary social emotional skills to thrive in any career.

Research states that girls are often interested in careers where they can “make a difference in the world” and are more goal-oriented regarding their futures than males. A well-developed pathway for black girls to careers in construction would allow them to dream bigger and envision ways they can work to create the type of Chicago that families in their communities no longer want to flee.

In its place will be a “New Chicago” that can stand taller than ever. Imagine a Chicago that is loving, safe and inclusive and that will have been developed and sustained by some of its best and brightest. These same girls will become women who can proudly drive around the city and point out the newest buildings saying, “I did that.” 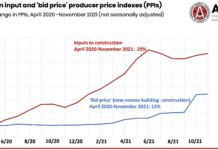 Illinois beats most of the nation in COVID-19 pandemic construction jobs recovery: AGC

2016 AGC Outlook Survey: Most contractors expect some growth in Illinois...