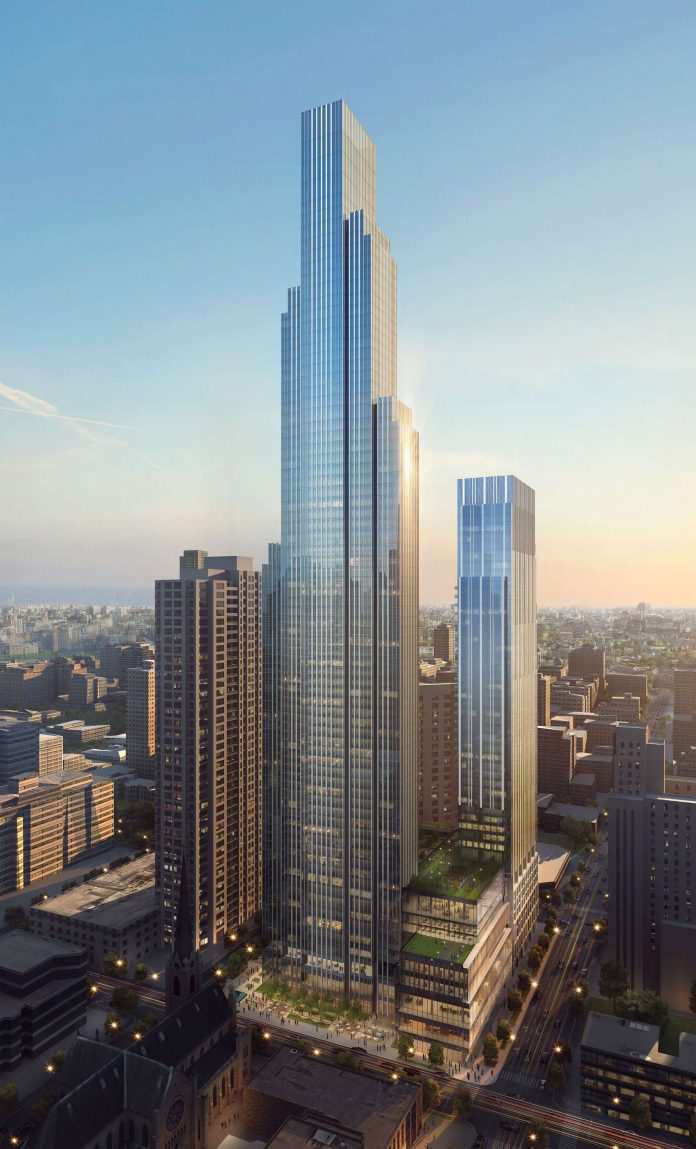 Architecture firms Goettsch Partners (GP) and Hartshorne Plunkard Architecture (HPA) celebrated the groundbreaking in late April for One Chicago, a new, two-tower residential and mixed-use complex designed in partnership between the two firms and led by JDL Development. The official ceremony for the project, located at 23 West Chicago Avenue in Chicago’s River North area, marked the start to the planned 41-month construction of the full-block development.

Power Construction is the general contractor for the project, which received a $46 million building permit on April 15.

One Chicago will create approximately 2.2 million sq. ft. of new residences, offices, parking and retail space, including a flagship Whole Foods Market, along with such amenities as a premier Life Time fitness and wellness center, a restaurant, and a large roof garden on top of a podium building.

“One Chicago has the scale and location to be spectacular,” says Jim Letchinger, president of JDL Development. “We carefully selected a project team to collaborate on this world-class design helmed by two of the city’s leading architects, both with deep Chicago roots and known nationally and internationally for large-scale urban complexes.”

The 76-story main tower anchors the new development’s southeast corner at State and Superior streets and will contain 276 apartments and 77 condominiums. Set back approximately 45 feet along its eastern side, the tower design creates a new urban park that provides a buffer from street activity as well as a sanctuary and amenity for residents, patrons and the public, including visitors to Holy Name Cathedral across State Street. The tower is composed of five vertical, rectilinear bars that drop off at varying heights as the program mix changes. The setbacks allow for multiple large terraces and create a more slender form as the tower rises. Expressive fins varying in width reinforce the verticality of the building, giving the façades a distinct texture. At the tower base, the residential lobby, amenity spaces and a large terrace open up to the urban park.

“The main tower emphasizes a strong verticality and elegant image that will create a new landmark on the skyline,” said James Goettsch,  chairman and co-CEO of Goettsch Partners. “We fully appreciate the significance of this project in the context of the city.”

The second tower, 49 stories tall and containing 459 apartments, anchors the northwest corner of the development at Chicago and Dearborn streets. Similar to the main tower, the building features roof terraces formed by the tower setbacks that provide private outdoor living spaces for residents. The podium is wrapped with activated functions, including 68 additional apartments, as well as the Whole Foods Market, Life Time fitness center, office space, event spaces and restaurant. Private residential amenities on the 10th floor extend out onto the upper podium roof deck, which provides an unusually large outdoor amenity in the heart of the city and overlooks the expansive series of pool decks offered by the fitness and wellness center. To bring circulation off the street and support logistics for the various building functions, all traffic, services and parking for the development are enclosed and controlled within the podium via a covered auto court, a truck turntable on the ground-floor loading dock, and basement loading areas.

“One Chicago will transform an underutilized site in the heart of River North into a dynamic, multifaceted development,” said Jim Plunkard, founding partner of Hartshorne Plunkard Architecture. “The project has been thoughtfully crafted to integrate millions of square feet of new programming into an authentic, urban experience for building users, neighborhood residents and the city as a whole.”

In total, the project will offer 812 residential units, 55,000 square feet of office space, and 188,000 square feet of retail, including the Whole Foods Market and Life Time facilities. One Chicago is scheduled for completion in 2022. 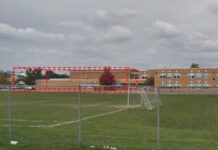 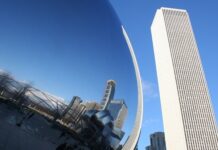