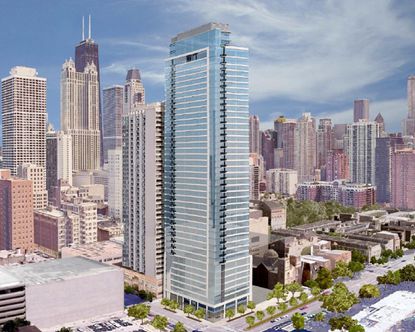 Developer Fifield Companies has scheduled a virtual community meeting for Wednesday, July 15 as it seeks approval to build a new 43-story tower at 125 W. Maple St. in the near North Side.

A posting by the Gold Coast Neighbors Association says it will be hosting the event with Ald. Brian Hopkins. The developers will explain “why they are proposing a zoning change from the existing RM-5 to DX-7, a planned development, to allow for the construction of a new 457-foot, 43-story building containing 406 dwelling units and 146 parking spaces. The building facade is primarily glass with stone, metal, and brick elements. The existing residential building would be demolished.”

“The location of the proposed planned development is in the expanded downtown district, where increased density is allowed for the purpose of generating bonus revenue stimulating investment in underserved communities throughout the city,” the announcement says.

The proposed structure would use air rights from the  Annunciation Greek Orthodox Cathedral. The site, just north of the cathedral, currently includes a small residential building and a parking lot.

Residents believe the proposed 457-foot-tall (139-meter-tall) tower is too ambitious for the size of the site, saying it would block sunlight and air flow, snarl traffic and reduce property values, said Wolfgang Suess, treasurer of the condo board and a spokesman for residents in the 34-story Galleria, the published report says.

The towers would be separated by an alley both buildings would use to access their parking garages.

“We’re shocked that it’s 20 feet (6 meters) away, which is obnoxiously close,” Suess was quoted as saying. “They would be making money at the expense of well over 100 units that would have to look directly into their building.

“We have every intention to fight this every step of the process to be sure it does not receive the multiple approvals it would need from City Hall. We will fight this.”

To attend the online meeting, register at this link.