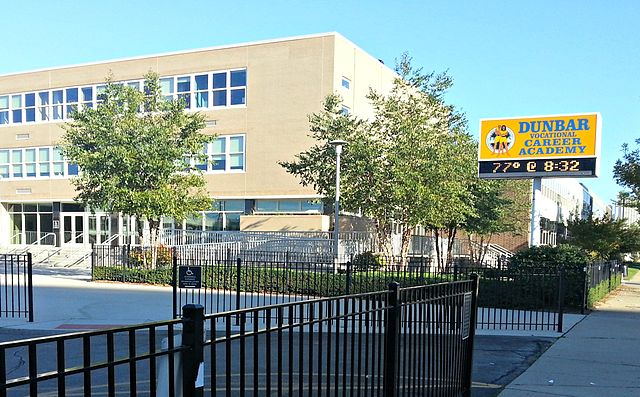 “Due to increasing demand by employers for the skilled trades, the ‘Construction Trades Campus at Dunbar’ is designed to create a model school focused on teaching students skills in the following industries: general construction; carpentry; heating, ventilating, and air conditioning (HVAC); welding; and electricity,” the mayor’s office said in a news release. “These investments will provide Chicago’s students greater choice in career paths and training that will set them on a path to the middle class.

“An investment in education is an investment in our future, and the new specialized trades school will teach our students competitive skills that are in high demand by businesses across the city and throughout the country,” said Mayor Emanuel. “I want to thank the Chicago Building Trades and Congressman Bobby Rush, who were instrumental in bringing these programs to Chicago’s students. By infusing our schools with strong partnerships like these, we can improve access to the middle class for our students, while signalling to employers the strength of our future workforce.”

Dunbar will expand its current career and technical education offerings to serve as a citywide hub for students to gain entry into the construction trades. The program will offer an intensive two-year option for students from schools throughout the city to attend daily classes that will provide them access to the construction trade industry and the requisite skills to pursue paths such as apprenticeships, post-secondary education, certification programs, or a living-wage job.

Mayor Emanuel and CPS worked closely with the Local School Council, community, Chicago Building Trades and Rep. Bobby Rush for several months to make the plan to create the new trade school a reality, the news release said. The expansion returns Dunbar to its roots, which had a construction trade focus when it first opened in 1942.

“My commitment to Dunbar has been lifelong because I live in this neighborhood and I want to see the youth succeed. Dunbar high school students will now have an opportunity to gain the necessary skills to build a career in the trades and sustain a living,” said Rep. Rush. “This endeavor will serve as a model that highlights the impact of public-private partnership in shaping the lives of young people by offering them an alternative to what’s currently before them.”

In collaboration with experts in the trades, CPS will launch a new custom-made curriculum this fall to ensure that student learning aligns with industry demands and to prepare students for jobs that exist today. In the first year, the program will serve up to 120 students through a dual-cohort model, which will serve both Dunbar students and applicants from surrounding CPS high schools through a citywide application, with preference for students in the community.

“CPS is committed to strengthening our high schools citywide with programming that will prepare our students for the careers of the future, and we’ve been fortunate to work closely with Congressman Rush and the school community to make that vision a reality at Dunbar,” said CPS chief education officer Dr. Janice K. Jackson. “We look forward to continuing to work with teachers, the community, and representatives from the trades as we infuse Dunbar—which has a history of educating students with construction skills—with new curriculum that will prepare students for the 21st century workforce.”

Students who complete the two-year cycle will develop foundational skills in a chosen pathway, authentic workplace experience, a portfolio of work in a specific field and an understanding of specific union application processes, while utilizing applied math and establishing a post-secondary plan.

To ensure students are exposed to modern professional practices, CPS is partnering with McCormick Place, construction firms and trade unions including the Regional Council of Carpenters, IBEW Local 134, IUOE Local 150, Laborers’ District Council, and Pipefitters’ Local 597, which will help guarantee the program is a relevant, useful introduction to the skilled trades. Additionally, Peoples Gas has committed to hosting students for a training program at their new training facility.

“Training and apprenticeship programs are at the core of the Labor movement in the United States and here in Chicago,” Jorge Ramirez, president of the Chicago Federation of Labor. “This new program at Dunbar High School will create a pipeline to the middle class for hundreds of CPS students who would not have been exposed to these careers otherwise. Individuals who complete this program will gain life-changing skills that will lead to greater opportunities after graduation, including access to stable, middle class jobs. It is a win-win for our students, our employers and our communities.‎”

The news release says CPS will work with Dunbar principal Gerald Morrow and the school community to hire 15 interns to assist Dunbar as the school prepares to launch the new programming this fall. “This program is about the future of our children – it’s about getting an early start on the good jobs that are growing in our city, and making sure that our children have the same access to those jobs as the children in other neighborhoods,” said Morrow.

The mayor’s office April 25  announcement “builds on a long list of investments by Mayor Emanuel to strengthen city high schools with curriculum, programs and opportunities that prepare students for the demands of 21st century college and career,” the news release said. “Since taking office, the mayor reformed city hiring processes to ensure that CPS graduates are allotted hiring preference for city jobs, and has created thousands of opportunities for Chicago’s students to harness jobs in construction industry, which continues to be one of the fastest growing sectors of the local economy.”

CPS is now accepting applications for the construction programming at Dunbar for the upcoming school year. For more information, see ChicagoBuilds.org.

The almost all-black school reportedly has a 84 per cent graduation rate, with 4 percent of the students proficient in math and 12 percent in reading, according to state standards.