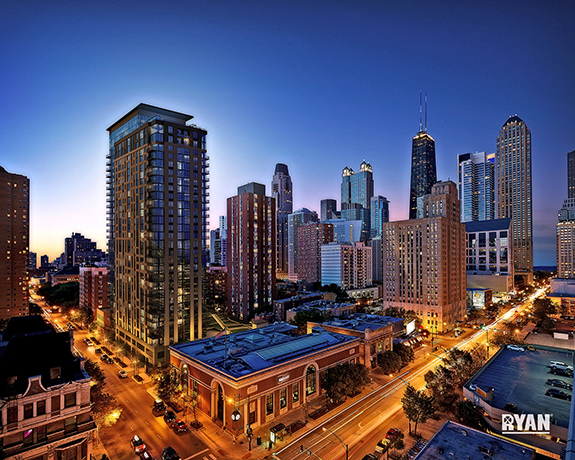 The 31-story, 373-unit tower, now referred to as 833 North Clark Street Apartments, will be constructed at the southeast corner of Clark and Chestnut Streets on a 41,000-sq. ft. site that was purchased from U.S. Bank. A groundbreaking ceremony to celebrate the launch of construction was held at the site on Friday, July 24, just days after the development team purchased the land parcel and closed on an $88 million construction loan with U.S. Bank, the developers announced in a news release.

“We are very excited to begin construction on the 833 North Clark Street Apartments,” said Dan Walsh, vice-president of development, Ryan Companies US, Inc. “This is one of this city’s iconic downtown neighborhoods. Our desire is to deliver an architectural gem that embraces history and adds to the great character of this special place.”

“A successful multi-family development begins with an outstanding team, a well located site and includes world-class architectural design with a comprehensive menu of services and amenities,” said Brian Byrne, executive vice-president, Lincoln Property Company. “It will all come to life through the collaborative expertise of this very special development team. This is a truly unique project.”

Ryan Companies US, Inc. and Lincoln Property Company are serving as co-developers of the project. Ryan also will be the design-build contractor and Lincoln Property will be the leasing and management firm. The design team for 833 North Clark Street Apartments includes design architect Ryan A+E, Inc;  Antunovich Associates, Architect of Record; Studio K, interior designer; and TGRWA, structural engineer.

Daiwa House Texas Inc. is the primary equity investor in 833 North Clark Street Apartments, a development valued at more than $100 million. Terms of the financial arrangement are not being disclosed.

The bank, also the previous owner of the 41,000-sq. ft. site, will continue to operate an adjacent office at the historic Cosmopolitan State Bank Building and rebuild its drive-through as part of the development’s parking structure.
When it opens in early 2017, 833 North Clark Street Apartments will comprise 373 luxury apartments, including 78 studios and convertibles, 212 one-bedroom units, 76 two-bedroom units and seven penthouse apartments. Unit sizes, except for the penthouses, will range from 563 square feet to 1,252 square feet. Penthouse units will range from 1,179 square feet to 3,250 sq. ft.

Stylistically, 833 North Clark Street Apartments is composed of two contrasting but notable Chicago architectural styles, the news release says. The buff-colored solid massing, dotted with playful punched openings, is inspired by Chicago’s turn-of-the century architecture. It meets the street in a traditional manner, with granite cladding and repetitive storefront window bays. This style wraps the majority of the east, west, and south façades. In contrast, the north end of the building reveals an all-glass massing, inspired by Chicago’s Miesian tradition. This creates a dramatic vertical expression over the building entry. The striking presence of the glass wraps horizontally over the top of the building where it meets an outdoor amenity terrace, 300 feet above the street. The interior spaces will complement this aesthetic while weaving in a few surprises for the Chicago market.

Overall, Ryan Companies is serving or has served as developer, owner, designer and/or builder on myriad multi-family housing projects, including senior living. Over the last 10 years these projects account for more than 5,300 units which have been placed into service or are under construction, the announcement said. Ryan’s most recent high-profile residential projects include: 222 Hennepin in Minneapolis, a mixed-use development with 286-unit luxury apartments over retail space; Downtown East, 195 luxury apartments that are part of a significant mixed-use development that includes 1.2 million square feet of office space in downtown Minneapolis, adjacent to the new Minnesota Vikings stadium; and Vintage on Selby, a mixed-use retail and multi-family housing development with 210 upscale apartments in St. Paul, Minn.