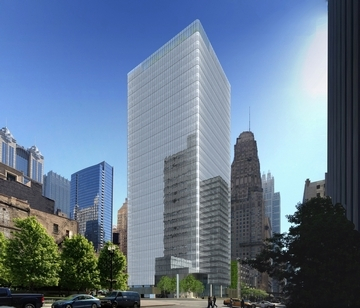 Office developers typically have to lease a bigger chunk of a project to get construction financing, but the deal could bring more tenants to the table, Chicago Business reports.

This project would be the third developer’s initiative to launch a downtown office tower since the recession.

“It makes the project for real,” tenant broker Bob Chodos, is quoted as saying. Chodos, a principal at Seattle-based Colliers International who is not involved in the deal, also said: “People who might be kicking the tires on that project will become more earnest in their pursuit. I suspect they will get some momentum pretty quickly.”

The tower, designed by John Ronan, should be completed by the third quarter of 2017, according to John Buck principal Bill Rolander, who confirmed the letter of intent.

John Buck disclosed in November 2013 that it had raised $145 million in equity for the project internally and from Toronto-based Canada Pension Plan Investment Board and Washington, D.C.-based National Real Estate Advisors, Chicago Business reported.