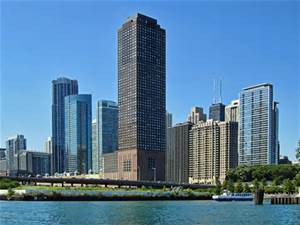 Curbed Chicago has reported that a permit has been issued to allow 465 N. Park in Streeterville to install a crane for the completion of its vertical construction. The 535-ft. 48 story structure, when complete, will house 444 luxury apartments and 11,650 sq. ft. of retail space.

Designed by Pappageorge Haymes Partners, the project comes from a partnership between Chicago-based Jupiter Realty Company and Met Life.

The design for the skyscraper calls for a 48-story residential tower set on top of a four-story podium. According to the architect’s website: “The base will include parking, a dramatic residential lobby, leasing offices, and commercial lease space” and that the “tower’s glazing will flow to the base in a distinctive form, further enlivening the active Illinois Avenue entertainment and retail corridor.”

The tower had originally been proposed as a 45-story structure but was raised after feedback from residents who sought a “broader mix of unit sizes and floor plans in order to offer a greater diversity of housing options in the building. In addition, some residents had asked that the profile remain as slender as possible to maximize natural light and air circulation around the tower.”

The project is expected to open in the spring of 2018.

Chicago architect Helmut Jahn to design a tower at 1000 S....