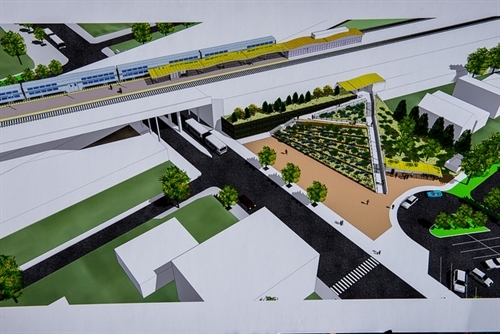 State Senator Jacqueline Collins is joining Metra executives on Sept. 30 (Monday) to celebrate the start of construction on a new station that will serve the Auburn Gresham area.

The project, along with a new Peterson Ridge station on the Union Pacific line, was planned years ago but budget cuts put the two stations on hold. (See this 2014 Chicago Construction News story describing the Auburn Gresham project, with completion anticipated in 2015.)

In 2017, the bond programs funding construction was cut from $1.1 billion to $835.7 million which meant pulling back on plans. But now, the state will give Metra $15 million for Peterson Ridge station and $20 million for the Auburn Park station, Curbed Chicago reported in August. This is a similar (slightly lower) budget from the $21.5 million cost expected in 2014.

In April, the Metra Board approved a $1.1 million change order with the firm T.Y. Lin International, Inc., to complete design for the station to be located just south of 79th Street on the Rock Island Line, according to a release published by the Greater Auburn-Gresham Development Corp.

“This expansion of public transit will mean greater accessibility and opportunity for a community that in recent history has seen disinvestment and exclusion from meaningful economic development,” Collins said in a statement. “I hope this day marks the beginning of more growth for Auburn Gresham.”