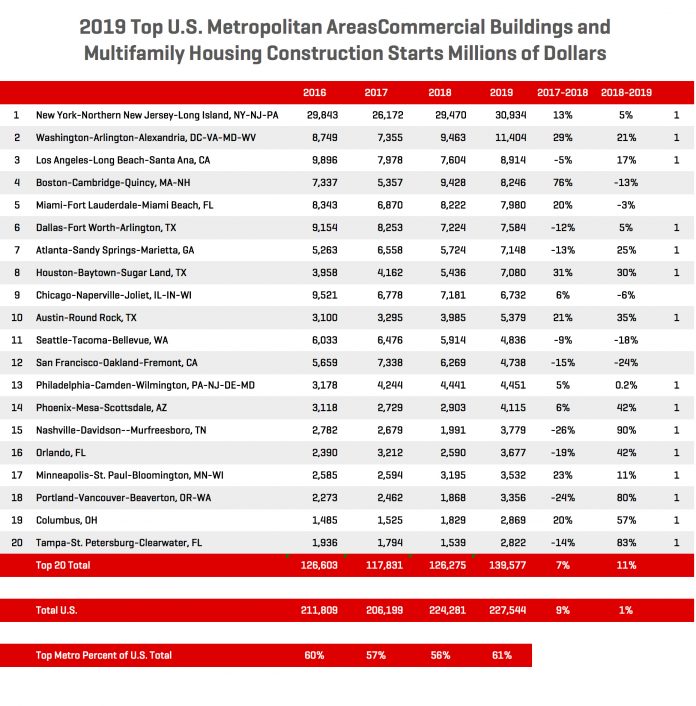 Nationally, commercial and multifamily starts were up one percent in 2019 at $227.5 billion. The top 10 metropolitan areas gained eight percent during the year, with seven of the 10 reporting year-over-year gains. In second-tier metropolitan areas (those ranked 11-20), gains in commercial and multifamily starts were stronger at 17 percent with eight of these 10 also posting growth.

Chicago, however, recorded a drop of six percent to $6.7 billion.

The New York metropolitan area was once again the largest market for commercial and multifamily starts at $30.9 billion. However, New York’s rate of growth eased in 2019 to 5% from a 13% gain in 2018. The Washington, DC area held on to second place in 2019, posting an 18% gain to $11.4 billion and Los Angeles metro jumped from fifth place in 2018 to third in 2019 due to an 17% increase that brought the value of commercial and multifamily starts to $8.9 billion.

“Multifamily starts, however, are past their peak and have entered cyclical decline. The growing divide however between the larger and smaller metro areas was stark in 2019. While commercial and multifamily starts in the top 20 metro areas in the country moved 11% higher in 2019, those metros ranked 21-50 lost 7%.”

For 2020 multifamily construction starts are predicted to continue lower as the declines broaden to more and more metropolitan areas.

“Meanwhile, commercial starts have posted gains for nine consecutive years, but a slowing economy in 2020 will likely lead to fewer large value projects, causing national starts to pull back from their 2019 level,” Branch said.

In Chicago, commercial building and multifamily construction rose 6% in 2018; but pulled back 6% in 2019 to $6.7 billion. Commercial activity slipped 25% in 2019 following a 38% gain in 2018. The only sector to see a gain in 2019 was commercial warehouses due to the start of the $170 million Project Jupiter Warehouse built by Seefried Properties Inc.

Also starting was the $170 million 167 Green Street Office Building and the $153 million Exchange 55 Industrial Development. The overall decline in 2019 for Chicago came despite a 22% increase in multifamily starts.

The largest multifamily building to break ground in Chicago (and indeed in the entire U.S.) in 2019 was the $850 million One Chicago Square Apartments, with work also getting underway on the $470 million 1000M South Loop Condos and the $350 million Lakeshore East–Cascade Apartment Tower #2.