“The ETOD Pilot Program is our city’s latest equity-focused and inclusion-driven effort that will aid in the revitalization of neighborhoods and leverage the incredible infrastructure assets they possess—CTA, Metra and Pace—to make them as vibrant, safe and sustainable as possible,” Lightfoot said in a June 18 statement. “Everyone in Chicago deserves to live in healthy, walkable neighborhoods with access to transportation options that not only connect them to opportunities in every corner of Chicago but enhance their quality of life overall.”

Adopted by the Chicago Plan Commission, the three-part ETOD plan was developed over the last two years to foster more equitable transit-oriented development citywide. “The plan’s goals include driving investment in transit-oriented projects on the South, West, and Southwest sides while also preventing displacement and promoting affordability in the North and Northwest sides of the city,” the statement says.

“For far too long, aspects of development have left communities behind,” says Alderman Harry Osterman, Chairman of the Housing & Real Estate Committee. “Bringing ETOD to Chicago will build wealth and equity through policies and investments that bring meaningful change to the city’s development framework in all communities.”

The plan includes the launch of a $135,000 pilot program, crafted in partnership with Elevated Chicago, Enterprise Community Partners, and members of the city’s ETOD Working Group to support up to 10 community driven ETOD proposals. Pilots will be selected through two-round application process. A selection committee of city staff, community groups, developers, and other experts will review and identify pilots. Applications opened today (June 22) at www.chi.gov/etod.

Once selected, pilot projects will receive micro-grants to enhance equity-focused components in their proposals. Projects with a community ownership component will be eligible for larger grants of $20,000. ETOD pilots will also receive technical assistance from city departments and local partners, such as initial project planning, assistance in resolving administrative hurdles and help in securing additional forms of financing.

“The benefits of living near public transportation, from walkable pedestrian-friendly spaces and access to jobs and other amenities, are amenities that all Chicagoans deserve to have in every neighborhood,” said DOH Commissioner Marisa Novara. “I look forward to the innovative solutions that this RFP will garner, ideas that come from communities and for communities to advance equitable development.”

The city’s ETOD Plan offers a roadmap of policies, incentives, and investments, which will mitigate the effects of housing segregation, build community wealth, improve climate resiliency and improve the overall health of residents.

The plan’s core strategies include:

“Chicago’s ETOD plan is a realistic road map that centers communities of color and racial equity in development near transit,” said Roberto Requejo, program director of Elevated Chicago. “The policies support neighborhood development that’s done with community residents, not to them, and without displacing them.  Elevated Chicago wants to advance recommendations that make land use and zoning more pedestrian-friendly, more transit-oriented, and less car-centric.”

“We look forward to more collaboration with city agencies and CTA so that community engagement is enriched and standardized, and funding and resources are adequately available to fully implement this groundbreaking plan,” said Requejo.

The three strategies were developed in response to core themes and trends identified by multiple city agencies and private partners over the last two years. Previous data analysis identified that TOD-eligible development sites near rail stations that have not been improved are 40 percent more likely to be in areas with Black and Brown populations. They also indicated that TOD-related construction between 2012 and 2017 typically resulted in the decrease of Black residents and an increase of white residents on adjacent blocks.

Chicago’s TOD policies allow projects at transit-served locations to eliminate parking and add density, which fosters more walkable, vibrant and convenient neighborhoods. Since the city’s first TOD policies were implemented in 2013, approximately 90 percent of the 220 qualifying projects have been downtown or on the North and Northwest sides While those communities should still benefit from ETOD efforts, the policy plan will address the lack of TOD in other neighborhoods, protect existing residents from displacement, expand housing opportunities, and ensure inclusive economic growth.

The planning process, which reviewed previous TOD policy improvements in 2013, 2015, and 2019, included a draft ETOD policy report issued last fall that was subject to 45 days of comments. The final ETOD plan, a public comment summary report, and more information about the pilot program are available by visiting chi.gov/etod. 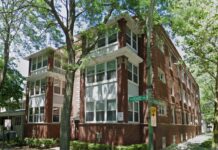 ADUs have limited impact on affordable housing supply: Six permits issued since May 2021