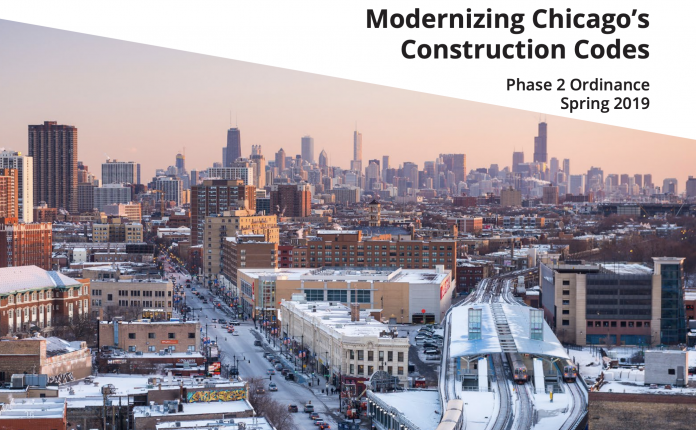 City Council voted on April 10 to adopt a major update to the Chicago Building Code that will better align the city’s construction requirements with up-to-date model codes and national standards. The new code represents the first comprehensive revisions to the building code in 70 years and will make construction in Chicago more affordable by expanding options to design and build with a wider range of materials and technologies. Chicago is now among the first major jurisdictions in the U.S. to adopt the 2018 International Building Code.

You can view the full 730-page Chicago Building Code here

“This world-class city continues to grow from the ground up. People want to move here, they want to invest here and they want to build here,” said Mayor Rahm Emanuel. “Chicago is taking the national lead in modernizing our building codes so that we can continue to advance sustainability, make construction more cost-effective and build on our city’s reputation for innovative design and world-renowned architecture.”

Emanuel and the Department of Buildings introduced the ordinance at the March City Council meeting. In addition to further streamlining the permit process, the new code will improve, enhance and spur on new building projects of all sizes throughout Chicago by adding more flexibility and options for construction materials.

This can bring down the cost of new construction and building rehabs in Chicago including single-family homes, affordable housing units, and two- and three-flats. In being more closely aligned with model codes and national standards, the new code will speak the same language as building codes used virtually everywhere else in the country and promote greater use of green technologies and best practices for sustainable building design and construction.

Though there have been several modifications to the Chicago Building Code over the years, the last comprehensive overhaul to the code was adopted in 1949. The code update approved today by City Council moves Chicago closer to national standards in several significant areas including building planning, fire and life safety, enclosures and materials, structural, small residential, and rehabilitation of existing buildings.

More specifically, the rewritten code will:

For more than  a year, the Department of Buildings has worked closely with the Departments of Fire, Health, Planning and Development, and the Mayor’s Office for People with Disabilities along with more than 150 volunteer technical experts and industry leaders to review and refine several drafts of the Chicago Building Code.

“For decades, there has been widespread recognition that Chicago should better align its construction requirements with model codes and standards used in other major U.S. cities,” said Building Commissioner Judy Frydland. “We could never have accomplished this monumental endeavor without the help of many dedicated professionals from Chicago’s design, construction and development communities who generously volunteered their time and expertise.”

The code modernization ordinance is based on the latest editions of the International Building Code for new construction and International Existing Building Code for rehab of existing buildings. A significant part of revising the Chicago Building Code involved adopting the common terminology and format used in other major U.S. jurisdictions. This will make it easier for all architects, designers and builders to understand Chicago’s requirements. In addition, the code will be easier to keep up-to-date going forward as national standards are changed or refined.

“This week is an important milestone for the City of Chicago as they work to modernize their building code based on the International Codes, the most widely used and adopted set of building safety codes in the world,” said International Code Council senior vice-president of Government Relations Sara Yerkes. “This modernization advances building safety in the city, and contributes to creating consistent codes across the state, and will help Chicago attract more business. We’re proud to support the City of Chicago as it moves forward with this historic update.”

Similar to the new Electrical Code and Elevator Code that were successfully implemented last year, the rewritten construction codes retain several requirements in the existing code that have enhanced building safety in Chicago’s unique local conditions and urban density such as stricter limits on the use of combustible materials in larger buildings.

The proposed changes will be phased in gradually, beginning June 1 and completely replacing the current Building Code by Aug. 1, 2020. During the implementation period, the Department of Buildings will continue to work with a wide range of stakeholders to ensure a smooth transition. The code modernization will not increase permit fees.