Chicago has issued a $41 million building permit to construct a 26 story apartment building at Huron and State on a narrow property.

CaVentures owns the site, which will be developed into 52 efficiency units and 53 dwelling units, with first floor retail, and 31 parking spaces on levels two to four, according to the building permit filing.

ChicagoArchitecture reports that the two buildings on the site to be demolished were both built in 1889. The architect of record is Mark D. Dewalt of Valerio Dewalt Train Associates.

“It’s a very narrow design, as necessitated by the tight space it’s slipping into,” ChicagoArchitecture says. “So tight that not only will 20 floors of balconies hang over the Huron Street public sidewalk, but even the feet of some of the caissons will venture into public property.  Naturally, the city will be compensated about two grand a year for both intrusions.” 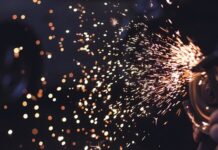